With some shipping now on the move again out of Ukraine, the northern Black Sea has been designated a Warlike Operations Area for merchant vessels. Sarah Robinson looks at what this means for seafarer safety and how trade unions are involved in providing protection for their members

When people embark on a career in the Merchant Navy, they're probably not expecting to see military action, but this is in fact a persistent safety problem for civilian seafarers around the world.

We might think of the cargoships in the Second World War supply convoys, or the ferries and cruiseships requisitioned as troop carriers (with their usual crews) for the Falklands conflict.

But many Merchant Navy seafarers who find themselves in danger from conflict aren't engaged in official 'war work', but find themselves in a dangerous situation as they go about their usual activities. For example, in the Telegraph we have told the stories of Nautilus International members whose civilian tankers came under fire in the Persian/Arabian Gulf during the Iran-Iraq war, and others whose vessels became marooned in the Great Bitter Lake off the Suez Canal as a result of the Six-Day War.

This year, Merchant Navy seafarers from all over the world have been asked to go through a war zone on an urgent humanitarian mission to bring crops out of Ukraine and on to the countries who rely on this food, which includes wheat, other cereals, and sunflower seeds for cooking oil.

Famously known as 'the breadbasket of Europe', Ukraine under normal circumstances is one of the top three grain exporters in the world, but since the Russian invasion in February 2022 has struggled to get its harvests out of mined and blockaded Black Sea ports.

Hopes were not high that this problem would be overcome, but after many false dawns, the involvement of Turkey eventually brought both Ukraine and Russia to the table in Istanbul to sign a United Nations agreement on 27 July – establishing the Black Sea Grain Initiative.

The Black Sea Grain Initiative specifically allows for significant volumes of commercial food exports from three key Ukrainian ports in the Black Sea: Odesa, Chornomorsk and Yuzhny. Ukrainian vessels guide the cargoships into the international waters of the Black Sea, avoiding mined areas. The vessels then proceed towards the Bosphorus Strait along an agreed corridor. Both the Russian and Ukrainian sides have agreed to withhold attacks on any of the commercial vessels or ports engaged in the initiative to transport vital grain.

For the merchant seafarers on the cargoships, their safety is in the hands of a new UN Joint Coordination Centre, which monitors implementation of the 27 July agreement. It is hosted in Istanbul and includes representatives from Ukraine, Russia and Turkey.

Ships heading to and from the Ukrainian ports are being inspected by teams organised by the Joint Coordination Centre to ensure they are only carrying the agreed food cargoes and not soldiers, weapons or ammunition. 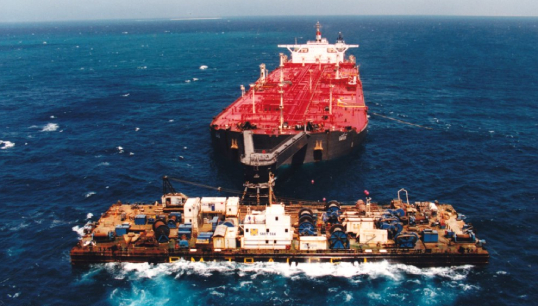 The Black Sea is just one of many maritime regions designated warlike or high risk areas in agreements negotiated between unions and shipowners – writes Rob Coston. Another notable example of a region where such agreements apply is the waters around war-torn Yemen.

Image: FSO Safer in 1988, the year it was moored off the Yemeni coast (Wikimedia Commons)

Five miles off the coast of Yemen, a crumbling oil tanker poses a critical safety threat to one of the world's busiest shipping lanes – but there is now hope that it can be removed before disaster strikes.

Ironically named FSO Safer, the dangerous vessel has been used as a floating storage and offloading facility for the country's oil since the 1980s.

It contains more than a million barrels of oil. Structural integrity is failing, and the fire-extinguishing system and systems to prevent explosions have ceased operating. Due to the civil war in Yemen, no maintenance work has been done since 2015, and only a skeleton crew remains onboard to try and prevent disaster.

If the vessel does break apart, it threatens to cause the world's largest oil spill and devastate both the ecology and economy of the Red Sea. Depending on conditions, it could also shut the port of Hodeida, clog the Bab el Mandeb strait and, as happened last year when the Ever Given blocked the Suez Canal, shipping would need to be diverted for an extended period, disrupting the lives and livelihoods of seafarers.

The country's Houthi rebels were initially unwilling to allow the oil to be offloaded without some of their other demands being met. In March 2022 they finally agreed to a United Nations rescue plan, which would involve a Dutch company stabilising the vessel, removing the oil and salvaging the ship, and then its replacement it with a new, equivalent facility.

The UN launched a global crowdfunding initiative to raise the US$144 million the plan requires, including the US$80 million for the emergency operation. The target has not yet been reached, but the UK government has become one of the largest donors – pledging £6 million.

However, the Houthis withdrew permission for a previous rescue operation in 2019, even though the UN had already chartered a recovery vessel. It remains to be seen whether the operation will go ahead and disaster can be averted in time.

Who are the Merchant Navy seafarers on the grain ships?

Initial reports suggested that maritime employers were struggling to find crew members willing to take part in the Black Sea Grain Initiative, and until recently Ukrainian nationals were not usually allowed to leave the country because of military conscription. However, permission has now been given for Ukrainian seafarers to travel for work, and recruitment from other nations seems to have improved, judging by the daily shipping movements being reported by the UN Joint Coordination Centre.

Inevitably for the shipping industry, some of these vessels will be crewed by seafarers from developing countries who are not in a financial position to turn down work and are not supported by a trade union.

'While specific terms of each agreement differ depending on the nature of the risk involved, in general they allow for seafarers to disembark before a vessel enters the affected area,' says Nautilus head of professional and technical David Appleton. 'They may also place obligations on companies to underwrite any insurance policies that may be rendered invalid by entering into the area and, in certain instances, agree additional payments for seafarers whilst they are in the area.'

Nautilus general secretary Mark Dickinson has been regularly involved with negotiations at the IBF, where Warlike Operations Area agreements for the Northern Black Sea Region, the Sea of Azov and All Ports in Ukraine were added in March 2022.

He stresses how important it is that seafarers around the world join a union, particularly one affiliated with the ITF: 'This is a powerful example of how unions work together internationally to secure protection for their members and help seafarers globally, and we will continue to be part of the movement to uplift everyone in the industry to decent and safe work onboard.' 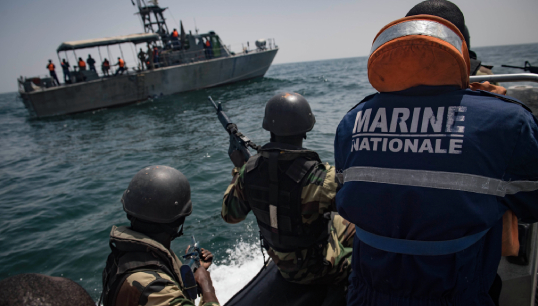 Seafarer safety flashpoints: Gulf of Guinea and Straits of Singapore

Warlike area and high risk areas agreements don't just apply to war zones; they can be declared because of a significant danger of piracy – writes Jon Parkin. Over the last decade the IBF High Risk Area and Extended Risk Zone agreements covering the Gulf of Guinea have been particularly important to seafarers, as the region overtook Somalia as the world's worst piracy hotspot.

Image: Increased security levels from nations across the Gulf of Guinea have been part of the attempts to reduce piracy levels (US Africa Command/Flickr).

In 2021, the Nigerian government announced a defence scheme called Deep Blue, aiming reduce the level of piracy around the Gulf of Guinea. The defence effort was in response to figures from 2020, when the region accounted for 40% of global piracy attacks and 95% of the 135 crew kidnapped from ships worldwide.

The scheme was met at first with a degree of scepticism; however, something appears to have gone right. Whether down to Deep Blue or other circumstances, piracy has now reduced in the region. Of the 58 total incidents reported to the International Maritime Bureau Piracy Reporting Centre (IMB PRC) in the first half of 2022, only 12 were reported in the Gulf of Guinea. This decline in attacks follows the global trend, with reported piracy incidents falling to their lowest level for the first half of a year since 1994.

To keep up the momentum, a new coalition has been formed between the Nigerian navy, shipowner associations such as the International Chamber of Shipping (ICS) and Intercargo. This group, the Nigerian Industries Working Group, will be looking to identify approaches that are working well in the battle against piracy, and areas that require further inspection.

Look east, on the other hand, and the picture isn't quite as bright. Asia has seen a rise in attacks, with ReCAAP Information Sharing Centre (ISC) stating there were a total of 42 incidents of armed robbery in Asian waters in the first half of 2022. This is an 11% increase over the 38 incidents reported in the same period of last year.

The ISC described the Singapore Straits in particular as an 'area of concern'. However, officials are keen to stress that while numbers have risen, they are still only a very small portion of the thousands of ships that pass through daily, and there is not currently an IBF Warlike Operations Area or High Risk Area agreed for the region.

Nautilus members in the UK and Netherlands are covered by national warlike operations agreements that go beyond the IBF terms.

In the UK, the process of drafting and renewing agreements is done through the Warlike Operations Area Committee (WOAC), at which terms are agreed directly between the maritime unions Nautilus and RMT and the UK Chamber of Shipping. There is a similar process in the Netherlands where Nautilus negotiates agreements with the Dutch shipowner bodies VWH, NEMEA, Neptune and Spliethoff.

The UK WOAC agreement for Ukraine applies to all vessels operated by companies in membership of the UK Chamber of Shipping. It expands on the IBF minimum in a number of ways – for example, by declaring a broader Warlike Operations Area that covers 'all Ukrainian, Russian and International Waters north of 44°North in the Black Sea.'

The Netherlands war zone agreement for Ukraine applies to Dutch-flagged vessels and is broadly equivalent to the UK WOAC agreement.

'Both the British and Dutch agreements reflect the importance of regular dialogue between unions and employers,' says Mr Appleton. 'We are not currently aware of any Nautilus members on vessels involved in the Black Sea Grain Initiative, but members with any concerns about operating in a warlike or high risk area should contact us and we will be able to advise them of their rights, whether those fall under the national agreements in the UK and Netherlands or they relate to the IBF agreement.'

How Nautilus got me home

Safety onboard: a meeting of minds at Maritime Safety Week

Cadet column: It's your Union

Museum musings: a cultural update from the world's maritime museums