Home News & insight Ships of the past HMS Beagle 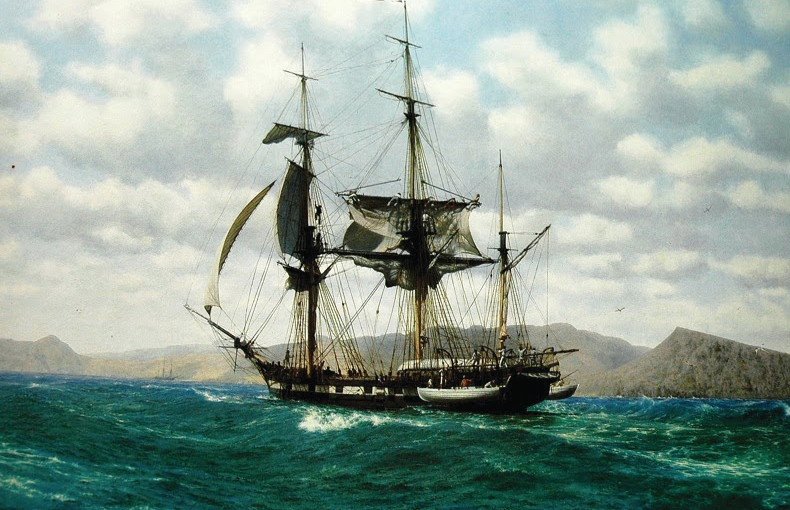 HMS Beagle was built at the Woolwich Dockyard in London, one of more than 100 Cherokee class brig sloops ordered by the Royal Navy.

Though designed as fighting ships, and fitted with 10 guns, many of them saw service as mail packet ships or undertaking patrols, reconnaissance, research, and survey work. Another Cherokee class vessel was HMS Nautilus, launched in 1830, which went on to serve as a training ship for 20 years before being broken up in 1878.

The two-masted Cherokee class vessels were designed by the Surveyor of the Navy, Sir Henry Peake, in 1807 – a few years after the start of the Napoleonic Wars. Just 90ft long, with a beam of around 25ft and a displacement of 235 tons, the Cherokee class ships were flush-decked, lacking a quarterdeck and a forecastle.

"Though designed as fighting ships, and fitted with 10 guns, many of them saw service as mail packet ships or undertaking patrols, reconnaissance, research, and survey work..."

They were described as having the highest ratio of firepower to tonnage of any ships in the Royal Navy but were deeply unpopular with their crews – who called them ‘coffin brigs’ because so many had capsized as a consequence of their low freeboards and high bulwarks. The ships were slow and suffered from excessive rolling and almost one-quarter of the 107 built were lost. The Navy liked them, however, as the Cherokee class was quick and cheap to construct and cheap to run. In naval service, they would usually operate with a crew of around 75, with a Commander in charge.

Beagle was the 41st Cherokee class ship to be built, and a few months after completion took part in the 1820 naval review on the Thames to mark the accession of George IV.

But with no immediate demands for its deployment following the end of the Napoleonic Wars, the ship then spent five years lying ‘in ordinary’ (lay-up) before undergoing a refit for duties as a survey vessel. The work included reducing the guns from 10 to six and the addition of a forecastle and a poop deck, together with a mizzen mast to improve maneuverability.

Following the refit work, Beagle began a four-year mission to undertake a hydrographic survey of the coast of South America from Rio de Janeiro in the South Atlantic to Chiloé on the Pacific. It was during this voyage that the Beagle Channel was identified and named, and the ship’s commanding officer, Commander Pringle Stokes, committed suicide after suffering from depression and locking himself in his cabin for a month.

Beagle’s second surveying voyage, under the command of Robert FitzRoy, started from Devonport in December 1831. Charles Darwin came along as a self-funded supernumerary, in part to alleviate the stresses and strains on the commanding officer by providing companionship and intellectual stimulation.

As well as completing and correcting the survey work from the first voyage, Beagle was given the task of obtaining an accurate series of longitude measurements by chronometer, as well making constant observations and records of tides, ocean currents, monsoons and trade winds, air pressure and temperature, sea surface temperature, and mapping out coral reef islands to help determine their structure and origins.

"Charles Darwin came along as a self-funded supernumerary, in part to alleviate the stresses and strains on the commanding officer by providing companionship and intellectual stimulation..."

The vessel was equipped with 22 chronometers and also tested a lightning conductor, a patent stove and windlass, and an early Sympiesometer – a mercury-free barometer, specially designed for use at sea. Before the voyage began, the ship underwent a major refit – much of it carefully supervised by FitzRoy. The work included raising the height of the main deck, adding sheathing to the hull, a new rudder, extra anchors, and more robust rigging.

Beagle sailed on the second voyage with 10 officers, four midshipmen and volunteers, 38 seamen and boys, eight marines, and eight supernumeraries, including Darwin.

Where was HMS Beagle built?

The HMS Beagle was built at the Woolwich Dockyard in London

How big was the HMS Beagle?

Just 90ft long, with a beam of around 25ft and a displacement of 235 tons, the Cherokee class ships were flush-decked, lacking a quarterdeck and a forecastle

How many crew were needed to man the HMS Beagle?

In naval service, they would usually operate with a crew of around 75, with a Commander in charge

Who was the most famous passenger on HMS Beagle?

Charles Darwin came along as a self-funded supernumerary, in part to alleviate the stresses and strains on the commanding officer by providing companionship

After completing its work in South America, Beagle sailed to the Galapagos Islands – where Darwin made the observations that led to his theories about evolution – and on to the South Pacific, New Zealand, and Australia, returning to the UK in October 1836.

HMS Beagle’s third voyage ran from 1837 to 1843, with the mission of charting the north and west coasts of Australia. Cdr John Wickham and Lt John Stokes, who had sailed on the second voyage, named Port Darwin and the Fitzroy River after their former shipmates.

Returning to the UK in September 1843, Beagle spent two years at Sheerness dockyard before being sold to the Coastguard and undergoing refit work for a new role as a static watch vessel, countering smuggling in the River Roach, Essex.

Renamed WV7 in 1863, Beagle was auctioned by the Admiralty in 1870 and sold for scrap to Murray & Trainer for £525. It is not certain what happened to the ship, and while it is believed that the timbers above the waterline may have been recycled in local building work, archaeologists have been working for some time to investigate whether some of the remains are still in the mudflats off Paglesham.

The mud dock where the vessel finished its career has been designated as a scheduled monument by the Department for Digital, Culture, Media, and Sport on the advice of Historic England.

Attempts have also been made to build a replica of HMS Beagle, and when the BBC made a seven-part drama series in 1978 called The Voyage of Charles Darwin, it struggled to find a suitable ship for the production. The brigantine Marques, built in Spain in 1919 and which had previously starred in The Onedin Line, was converted to play the part of the Beagle.

It has been suggested that the costs of the work, insuring the vessel, and employing an experienced crew to operate it during the filming may be a reason why there have since been so few maritime TV dramas.

A series of events to celebrate the 200th anniversary of Beagle’s launch had to be called off because of the coronavirus pandemic in 2021. However, Rochford District Council - in the area where the vessel ended its days - is creating a lasting commemoration in the form of an observation platform at Wallasea Island Wild Coast Project, overlooking the spot where the ship was moored.

From this point, visitors will be able to immerse themselves in a CGI tour of the HMS Beagle by holding their smartphone up to the horizon to see what the ship would have looked like in situ, in the late 19th century. An interactive virtual tour of the vessel is already available online.