Home News & insight Ships of the past Royston Grange 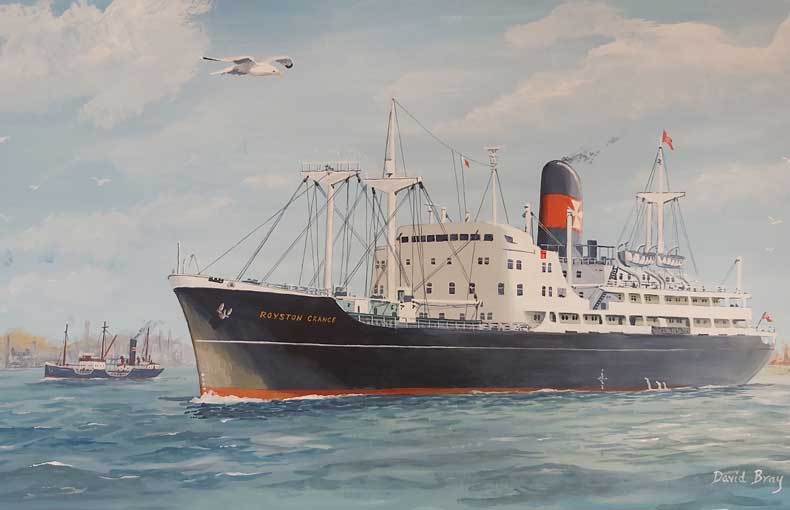 Of 10,261 grt, Royston Grange and sistership Hardwicke Grange were specially designed for the popular service between the UK, Argentina and Uruguay. Of 489ft (149m) loa, the vessels  had six refrigerated cargo holds and were powered by two double-reduction steam turbines developing 8,500shp and giving a 16-knot service speed.

Launched in June 1959 at the Leslie Hawthorn yard in Hebburn, Royston Grange was refrigerated passenger and cargoship built for Houlder Line's services between the UK, Argentina and Uruguay.

London-based Houlder Line had been operating on the route since 1881, and had joined forces with Furness Withy in 1914 to launch Furness-Houlder Argentine Lines, running a fleet of fast twin-screw steamers carrying chilled and frozen meat from the River Plate to London.

Early in the morning of 11 May 1972, Royston Grange was sailing through the Punta Indio Channel in the River Plate, bound for Montevideo, Santos and London, having left Buenos Aires with a cargo of beef, butter and grain. A total of 61 crew, 12 passengers and an Argentinian pilot were onboard.

At around 0540hrs, in dense fog, Royston Grange collided with the Liberian-flagged tanker Tien Chee, which was inbound from Puerto Rosales, carrying almost 20,000 tons of crude oil. The ships were passing port-to-port when Royston Grange veered to port and its bow struck the tanker amidships, holing several wing tanks.

Tien Chee burst into flames, and a series of explosions resulted in a fireball which engulfed both ships. All 74 people onboard Royton Grange were killed – the first time since the Second World War that all hands on a British ship had been lost.

Eight of the 40 seafarers onboard Tien Chee were lost, but the remaining 32 and the ship's pilot managed to escape in lifeboats and were rescued by Argentine and Uruguayan tugs and coastguard vessels. Firefighting efforts were severely hindered by the intense heat, dense smoke and thick slick of crude oil. It took almost four days for the fire onboard Royston Grange to be fully extinguished.

Investigations into the accident were almost immediately opened by Argentina, Liberia and the UK. Protests were made by the UK when Argentinian authorities refused British investigators access to Tien Chee or to take sworn statements from witnesses pending a judicial inquiry.

However, trade and industry minister Michael Heseltine told Parliament in June 1973 that he was 'favourably impressed' by the quality of the subsequent Liberian investigation report on the accident and considered that a further inquiry by the UK would be unlikely to reach different conclusions.

The Liberian investigation had concluded that the collision had been the consequence of the close proximity of the two ships in the narrow navigable channel, which was unsuitable for two-way traffic at the time. The report stated that Tien Chee's master and pilot had probably navigated too far to the south side of the channel in their attempts to get sufficient water for the tanker's deep draught, forcing Royston Grange towards the shelving bank.

In fact, the tanker had been running about three hours behind schedule and investigators said the master and pilot probably should not have entered the channel given the tidal conditions at the time. The ship's speed of 12 knots before the collision was also criticised and Argentina's Administrative Court of Navigation censured the Tien Chee's master for handing over control of the ship to the pilot and failing to question his actions.

The pilot was also sanctioned for giving incorrect advice about the available water depths, having told the master that there would be 0.6m more depth than shown for low water.

Liberia's report was highly critical of the lack of maintenance and poor dredging of the channel, noting that a build-up of mud and silt on the riverbed had exacerbated the effects of squat and interaction.

In an attempt to learn lessons from the accident, the UK commissioned a programme of tank tests at the National Physical Laboratory to examine technical circumstances leading to the collision. Analysis suggested that bank rejection had caused Royston Grange to sheer towards the Tien Chee, but because the tanker had negligible under-keel clearance and may have been squatting on the muddy bed, its manoeuvrability was probably compromised.

Although investigators found that Royston Grange had tried to take avoiding action – with the rudder hard over starboard and the engineroom telegraph set to full astern – the speed and intensity of the fire prevented any attempts to abandon ship.

One report concluded that temperatures exceeded 1,000°C and there was evidence to suggest that all those onboard died almost instantaneously. The remains of the victims – which were mostly little more than ashes and charred bones – were buried at two communal graves in the British cemetery in Montevideo nine days after the accident.

Houlder Brothers chartered an aircraft to take 130 relatives to the burial in Montevideo and a memorial service was held in the following month at All Hallows-by-the-Tower in London, where a stained-glass window was later unveiled as a permanent tribute to the victims.

On 11 May 2022, the church would once again stage a memorial service commemorating the 50th anniversary of the disaster.

The accident is remembered not only because of its horrific nature, but also because of the safety lessons it continues to present. The immediate recommendations flowing from the investigation concentrated on the need for special lights on ships carrying dangerous cargoes, as well as the use of VHF for communications between vessels transiting the Punta Indio Channel. However, the risks of interaction highlighted by the accident are still frequently referenced in training material for masters and deck officers.

Forty years after the accident, an article in the UK Maritime Pilots Association magazine noted: 'As ships get ever bigger and operational windows are reduced, safety parameters are inevitably eroded and the Royston Grange tragedy serves as a reminder as to how important an understanding of hydrodynamics are to safe ship handling.'

The magazine highlighted a 2012 UK Marine Accident Investigation Branch (MAIB) report on a remarkably similar collision in which one ship took 'a sudden and uncontrollable sheer to port' and into the path of another. 'The cause and effects of interaction should be recognised and taken into account,' the MAIB stated. 'Speed is critical, since the magnitude of forces created by both bank effect and squat increases with the square of the vessel's speed through the water.'

Canada's Transportation Safety Board has also stressed the continued relevance of the Royston Grange accident, warning that hydrodynamic forces 'have damaged or completely grounded vessels, often bringing vital traffic to a halt for hours or days at a time.'

Indeed, the case was cited in the analysis of the 2021 Ever Given incident in the Suez Canal – with experts pointing to the combined influences of speed, squat and bank effect.

As the tragedy of the Royston Grange is once again commemorated, it must be hoped that its lessons are never forgotten.

When was Royston Grange launched?

Royston Grange was launched in June 1959

When did the Royston Grange disaster take place?

How many lives were lost?

All lives were lost, including 61 crew, 12 passengers and an Argentinian pilot.

Royston Grange is sadly most often remembered for the May 1972 disaster that claimed the life of all the crew and passengers onboard. But there were many good times onboard the vessel that should be celebrated as well - as these memories show

Contortionist cadet: John Peard smiles at thoughts of how a snake-like fellow cadet could sneak into the galley through a porthole to pinch some freshly-baked snacks. Read more...