Royal Fleet Auxiliary Commodore David Eagles has issued an extensive response to concerns raised by Nautilus members during the 2021 pay and conditions review.

The Union was pleased to note that these concerns have been taken extremely seriously, with several positive suggestions.

In a letter to Nautilus, Commodore Eagles expressed his appreciation for the support of Nautilus members and the broader RFA workforce during the pandemic and noted the importance of a continuing partnership to achieving the organisation's objectives.

'I have tried in this response to give my considered views on each proposal that has been put forward. As I have indicated, I believe that there are genuine benefits in some of the proposals, although further work may be needed for others. Even in those areas I cannot agree to, I fully accept that these were made to positively support all of us within the RFA,' he said.

On the issue of pay, Commodore Eagles pointed out that the UK Treasury has decided to provide no public sector pay increases except for those below the below the £24,000 pay threshold, who will receive £250. 'We will all have noted in the news that the pay pause may well be lifted next year, and we shall examine what this may mean for the RFA as and when further information is forthcoming,' he said.

He ruled out an immediate independent pay review but said that one could take place in future, despite the failure of a 2011 review by Deloitte which was unable to complete the job as the consultancy was unable to find any organisations comparable to the RFA.

Commodore Eagles also responded to perceived differences between RFA and Royal Navy personnel and expressed hope that a 'whole force' approach under One Navy will bring benefits to the RFA in future.

Following suggestions from members for improved working conditions, the Commodore has agreed to:

The trial was considered a success and the RFA has now committed to resume three-month appointing cycles as soon as practically possible, with the current intention by summer 2022.

Regarding Magellan incorrectly accruing leave, a commitment has already been provided that this will be resolved with the changeover to One View. In the meantime, individual cases will be looked at where personnel are leaving the RFA, and the correct leave will be worked out prior to their final pay being calculated.

The Commodore thanked members for acknowledging improvements already made in this area and said that he continues to welcome suggestions.

Regarding this initiative, the Commodore said: 'One Navy is about brigading all elements (RN, RM, RFA, Mainstream CS and Reserves) to pull together, work seamlessly and deliver the required output as a coherent, unified workforce.

The Commodore addressed a broad range of additional concerns, including around the filling of critical posts, uniform, and crewing. These can be viewed in the full letter.

Nautilus members have now sent their responses to the letter to the Union. Further details on the pay and conditions review – and opportunities for members to contribute their views – will be shared via industrial bulletins. 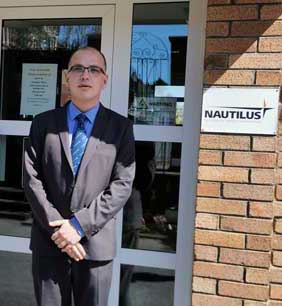 RFA Fort Victoria has returned to the UK after a 195-day deployment with the Royal Navy’s Carrier Strike Group. The 33,675-tonne ship arrived at Defence Munitions (DM) Crombie in West Fife on 12 December.

Your Union representative at the RFA