Home News & insight Ships of the past Oxfordshire

The Oxfordshire had a 34-year long career as an emigrant ship, passenger liner and cruiseship. 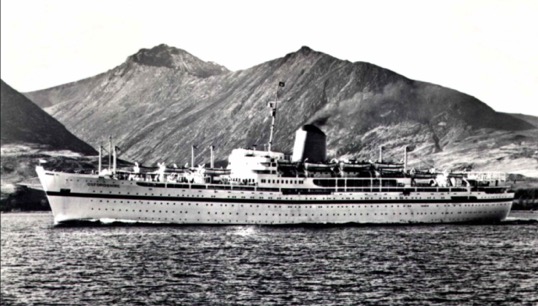 The Bibby Line vessel was built by Fairfield Shipbuilding on the Clyde and was designed to replace the 1914-built Lancashire and was a near-sister to British India's Nevasa.

In 1963, the Oxfordshire underwent a refit to take on its new role as a emigrant-carrying ship. The work included a project to lengthen the ship, increase the vessel's tonnage to 21,619grt and to equip it to carry 1,868 passengers in 488 cabins. Due to the size of the project and the higher cost it took longer to complete than planned and the final fitting was carried out at the Harland & Wolff yard in Southampton.

On 28 February 1957, the Oxfordshire left Liverpool on her maiden voyage under the command of Captain Norman Fitch, bound for Hong Kong via Dakar, Cape Town, Durban and Singapore.

In five years of operation as a troopship, Oxfordshire made an annual average of four trips between Britain and the Far East. However, the writing was on the wall for both Oxfordshire and Nevasa soon after they entered service.

Britain had started to scale back its military presence east of Suez and made increasing use of aircraft to move military personnel around quicker and cheaper than by sea. In 1962, the 20-year charters of the two ships were terminated and both were withdrawn from service, with the Oxfordshire completing its final trooping voyage from Malta in December 1962.

The Oxfordshire then began a new career as an emigrant-carrying ship following a short period in lay-up. In early 1963, Bibby Line chartered the vessel to Italy's Sitmar Line for six years and Oxfordshire was sent to the Wilton-Fijenoord shipyard at Schiedam to be converted into its new role.

After its purchase by Fairline Shipping in 1963, the Oxfordshire was renamed Fairstar and switched to the Liberian flag. The vessel then operated an emigrant service to Australia from 1964 to 1973. In the following year, the Fairstar became a full-time cruiseship operating from Australia to the South Pacific and the Far East.

How big was the Oxfordshire?

What was the Oxfordshire renamed?

When did the Oxfordshire end its service?

Whilst the Oxfordshire underwent its conversion in 1963, the vessel was bought by the Sitmar subsidiary Fairline Shipping – reportedly to circumvent a charter requirement to retain Bibby's crewing arrangements for British officers and Indian ratings.

In 1989, P&O bought the Sitmar operation and Fairstar came under P&O management, carrying around one million passengers covering more than two million nautical miles, until mechanical problems and SOLAS Convention requirements saw the ship being sent for scrapping at Alang in April 1997.