Home News & insight Ships of the past Doulos

Launched in August 1914, the US-built Doulos claimed the title of world's oldest ocean-going passenger ship for many years. 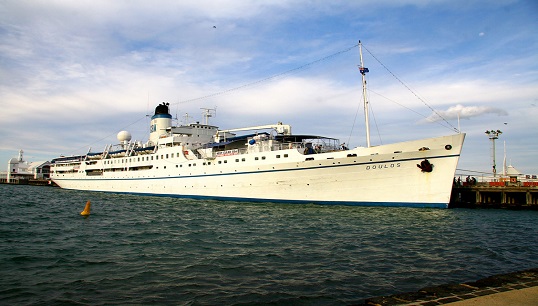 Originally launched as the cargo ship Medina, the vessel was one of a pair ordered by the Mallory Steamship Company from the Newport News yard in Virginia.

The ship was modified to burn oil in 1922 and after being sold to a Panamanian company in 1948 the ship was converted into a 6,818grt passenger ship.

After purchase by Costa Line in 1952 and renamed Franca C, it was equipped with a diesel engine in place of the original steam engine. The Franca C was refitted as a one-class cruiseship in 1959 operating Mediterranean and Caribbean cruises until 1977.

After being purchased by Gute Bucher fur Alle (Good Books for All), the Doulos was converted at a yard in Bremen to operate as a Christian mission vessel, claiming to be the world's largest floating library.

The Doulos underwent a full electrical upgrade in 1983 and had a new fire-fighting system installed in 1986, with further fire protection measures taken in 1995.

In 2009 – soon after being described as being 'held together by rust, paint and the faith of those who sail in her' – a classification society survey showed that more than €10 million would have to be spent to ensure compliance with the 2010 SOLAS Convention requirements and the decision was taken to retire the vessel at the end of the year.

When launched under the name Medina, the vessel mainly transported fruits and vegetables between Galveston and New York.

The Medina was used as a US military supply ship during the First World War and served as the Commodore's flagship in a convoy to Europe in August 1918, before returning to the Mallory Steamship Company at the end of the conflict.

The Medina spent a while under charter to the Cuba Mail Line running between New York and the Caribbean in the mid-1930s.

After being sold to a Panamanian company and renamed Roma, the vessel was converted into a passenger ship which could carry up to 981 people and was used to carry pilgrims from the US to Rome before running emigrant voyages to Australia and carrying Dutch nationals to Rotterdam after Indonesia became independent.

After purchase by Costa Line in 1952 and being renamed the Franca C, the vessel ran emigrant services from Italy to South America between 1953 and 1959, until it was refitted as a cruiseship in 1959. The Franca C then operated Mediterranean and Caribbean cruises until 1977.

Renamed Doulos and now operating as a floating library, the vessel covered more than 358,000nm between 1978 and 2010. The ship was operated by volunteer crew members and visited more than 100 countries and 297 ports around the world, selling more than 1.5 million books and welcoming almost 21.5 million people onboard.

After being purchased by a Singapore-based businessman and renamed Doulos Phos, the ship was modified to operate as a luxury hotel on the island of Bintan, Indonesia.

How many name changes did the Doulos undergo?

The ship was renamed fourtimes, from Medina to Roma, Franca C, Doulos and Doulos Phos.

What ship types did the Doulos operate as?

The Doulos operated as a military ship, cargo ship, passenger ship and cruiseship.

What was the Doulos's original grt?

After serving as a military supply ship again during the Second World War, the Medina was sold to a Panamanian company in 1948, where it was renamed Roma.

In 1952, the Roma was purchased by Costa Line and was renamed Franca C and took on a life cruising until 1977. The ship was then saved from the scrapyard when it was bought by German charity Gute Bucher fur Alle (Good Books for All), which celebrates its 50th anniversary in 2021. The Franca C was then renamed Doulos.

In March 2010, the Doulos was saved again. The ship was purchased by a Singapore-based businessman for conversion into a luxury 104-room hotel. Renamed Doulos Phos, the vessel was towed from Singapore to Indonesia and underwent extensive modifications before starting the new role on the island of Bintan in June 2019.

Launched in December 1967 at the Austin & Pickersgill (A&P) yard in Sunderland, the 9,034grt general cargoship Nicola was the first in a series of more than 200 British-designed vessels intended to replace the 'cheap and cheerful' Liberty ships built by the US during the Second World War.