The standard uniform for the British Merchant Navy has its origins in war, not peaceful trade. ANDREW LININGTON finds out how many familiar aspects of today’s shipboard attire came into being a century ago

Sixty-five years ago, a member of the Marine Engineers’ Association (MEA) – a Nautilus predecessor union – wrote to the MEA’s magazine to lament the sartorial standards of his fellow seafarers. He urged them to wear their uniforms while ashore to 'remind the rest of the population that there is still a Merchant Navy'.

His colleagues, he claimed, regarded the uniform 'as a badge of servitude to be worn by postmen, bus conductors and others, who show their contempt for the garb by making it look incongruous with coloured shirts and gaudy ties'.

Quite what the writer would have made of today's boiler suits and baseball caps is a matter for speculation – but one thing is for sure, concerns about the smartness of seafarers are nothing new.

August 2019 marks the centenary of the introduction of the British Mercantile Marine Uniform Act; regulations which sought to enforce the wearing of a standard national uniform for merchant seafarers, which had been developed towards the end of the First World War.

For many centuries, merchant seafarers had a sort of unofficial dress code of functional loose serge trousers and pea jackets. By the 19th century, an increasing number of companies – such as the East India Company, the Hudson Bay Company and the packet service – had introduced uniforms for their officers. 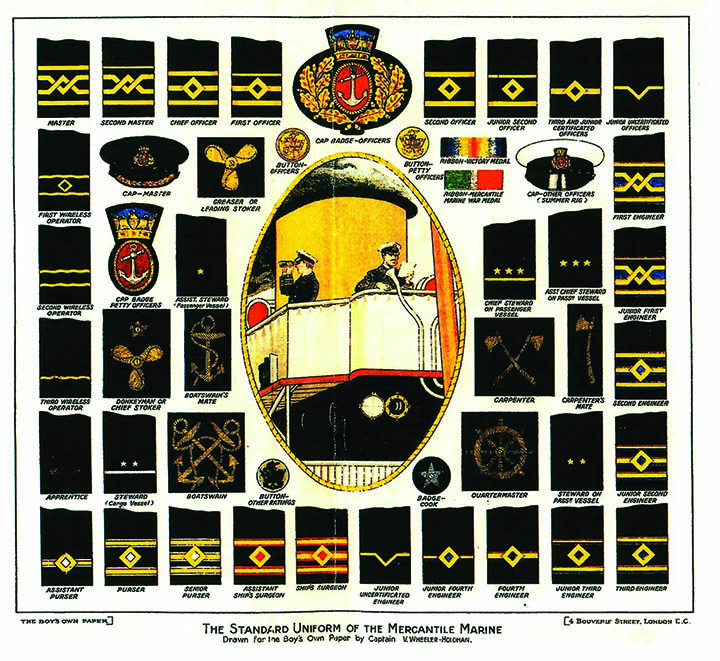 The catalyst for a standard set of clothing and insignia was the execution in 1916 of Captain Charles Fryatt, the master of a British merchant ship who had been captured by the Germans after attempting to ram and sink a U-boat. He was sentenced to death for his so-called illegal act of aggression – in other words, because he was deemed to be acting as a pirate rather than an official combatant in a war – on the basis that he was wearing a company livery and not a service uniform when he killed German sailors.

The outrage that was sparked by Captain Fryatt’s death resulted in representations being made by deck and engineer officers’ organisations for the 'institution of a standard uniform for the Merchant Service'.

Confusion over the status of merchant seafarers' uniforms had not been confined to the Germans, however. During the war, some senior Royal Navy officers had complained about the impersonation of RN personnel and of a threat to naval discipline posed by their civilian counterparts.

Pressure for a standard uniform had also come from merchant seafarers who wanted to wear it while ashore 'to indicate that they were on a service of national importance… and to avoid enquiries as to why they were not in the Army'.

The Board of Trade appointed a special committee, with members including officer representatives, shipowners and the Admiralty, to consider the issues. Although two of the owners' representatives opposed the proposals (on the grounds that the need for a standard uniform had arisen because of the war and, they claimed, officers would not wear them ashore once the conflict was over) the committee recommended that a formal uniform should be introduced – but it should not be made compulsory onboard ship.

An Order in Council was issued in September 1918, prescribing a standard merchant service uniform in an attempt to prevent any repeats of the Fryatt incident. However, the development of the uniform also reflected a deeper desire to pay tribute to the huge sacrifice made by merchant seafarers during the war, with more than 14,000 being killed.

In a House of Commons debate in 1917, MP Sir Basil Peto expressed his hopes that agreement would be reached 'upon some uniform which will not be regarded merely as the livery of the owner of the ship and worn in that capacity, but which will be regarded as a mark of distinction and as something which will show that these men have a definite part in the national organisation for the protection of their country in time of war'.

Regulations had been developed for Royal Navy officer uniforms as far back as 1748, and the new merchant service insignia drew from the standards that had been set by the RN, with detailed measurements for the gold braid rank stripes for masters, officers and cadets, as well as the use of distinctive cap badges and buttons. The merchant service rank stripes used a lozenge shape in place of the RN's 'executive curl' but followed the RN's use of colours between the rows of gold lace, which were introduced in 1864 to indicate the branch to which an officer belonged.

Officer representatives gave a warm welcome to the introduction of the standard uniform. A ballot of members of the Mercantile Marine Service Association and the Imperial Merchant Service Guild showed 2,217 in favour of the plans and 52 against. The Guild commented that 'the design is a tasteful one, and one appropriate to the dignity and standing of the Merchant Service'.

In 1919, merchant service uniforms were given legal protection through the British Merchant Marine (Uniform) Act – with fines of up to £5 for 'unauthorised persons' and up to £10 or prison and hard labour for those wearing it in such a manner or under such circumstances as to be likely to bring contempt on the uniform.

An exception was made to allow the uniform to be worn 'for the purposes of a stage play or representation, or a music-hall or circus performance if the uniform is not worn in such a manner or under such circumstances as to bring it into contempt'.

The regulations also introduced penalties for seafarers who did not wear their uniform correctly either at sea or ashore – fines of up to £5 for being dressed partly in uniform and partly not in uniform 'under such circumstances as to be likely to bring contempt on the uniform'. A similar penalty could be imposed on those wearing a uniform higher than the rank in which they were serving. These clauses were brought in despite some opposition, with Lt Cdr Joseph Kenworthy – then the Liberal MP for Hull – warning Parliament that it could set a 'dangerous' precedent.

The regulations were consolidated in 1921 when a fresh Order in Council established new widths for the gold bands on officers' cuffs and epaulettes and prescribed in detail the style and material of the clothing for masters, officers, cadets and apprentices – right down to the circumstances in which a great-coat, a frock-coat, an undress coast, a working undress jacket, a mess jacket, waistcoat, neckties and comforters, gloves, and a foul weather coat and hat could be worn.

The Order also laid down the specifications for the officers' cap badge: 'Gold Naval Crown over silver anchor (without cable); the anchor on red oval cushion with gold rope rim surrounded below and at the side by gold oak-leaves and acorns.'

All this, of course, came before the formal title 'Merchant Navy' was adopted for British commercial shipping. Although the term merchant navy had been used, it was more common to see the fleet referred to as the mercantile marine or the merchant service until King George V conferred the title 'Merchant Navy' on the service in 1922. But that's another story.