Home News & insight Ships of the past Gothic 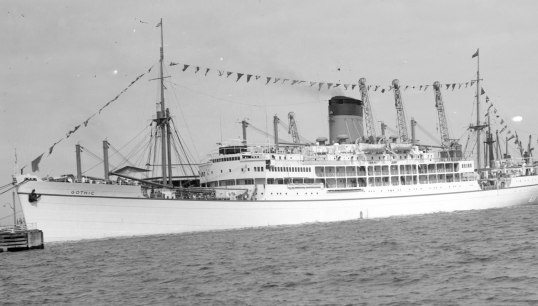 Built at Swan Hunter's Wallsend yard, Gothic was the last in a series of four Corinthic-class liners ordered by the Shaw, Savill & Albion Line in 1946 for the service between the UK, Australia and New Zealand.

Gothic entered service in December 1948, and in 1951 was sent for a refit at the Cammell Laird yard after being chosen to serve as the royal yacht for a tour which had to be cancelled after the death of King George VI.

Gothic returned to the yard in 1953 for the completion of the refit work – which included modifications to the accommodation, the installation of special Marconi communications equipment, and painting the black hull white.

The Queen and the Duke of Edinburgh joined the ship in Jamaica on 22 November 1953, along with two ladies-in-waiting, three private secretaries, a press secretary, an acting Master of the Household, two equerries, 20 officials and staff, 72 naval staff, nine members of the press and a band of the Royal Marines.

Gothic sailed via the Panama Canal to Fiji and Tonga, before spending three months visiting New Zealand and Australia. The return trip included calls at Cocos Island, Colombo and Aden, arriving there on 27 April 1954 to enable the royal party to disembark and join the now commissioned Britannia for the last leg home.

Gothic returned to normal service later in the year and continued on the UK-New Zealand run until a devastating fire broke out onboard in August 1968, killing four crew members and two passengers. The ship's master, Captain Brian Agnew, was awarded an OBE for helping to save the ship but the company decided repairs would not be viable and Gothic was demolished in Taiwan in August 1969.

How long was Gothic?

What engines did Gothic have?

For which monarch was Gothic selected as the royal yacht?