Home News & insight Ships of the past Manxman

Over the past century two vessels serving with the Isle of Man Steam Packet Company (IoMSPCo) have borne the name Manxman, with the company's newest ferry – due to enter service in 2023 – set to be the third. 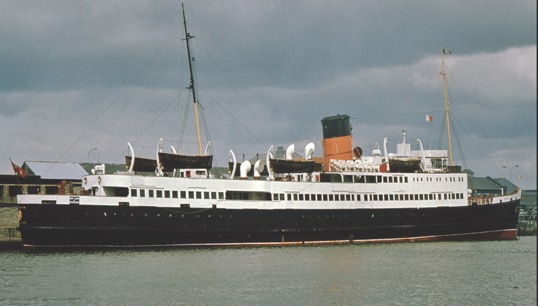 The first Manxman operated for the IoMSPCo from 1920 until it was requisitioned by the Ministry of War Transport in the Second World War and was subsequently withdrawn from service in 1949.

The Manxman two was built at Cammell Laird's Birkenhead yard and served from 1955 until 1982. Ordered in 1953, the turbine steamship Manxman was the last in the 'King Orry' series of six ships built for IoMSPCo in the decade after the war.

The vessel had a grt of 2,945 and a loa of 344ft (105m), and was designed to carry up to 2,383 passengers and 68 crew. The Manxman was notably different from other ships in the series as it was fitted with a pair of Parsons and Marine Engineering Turbine Research and Development Association (Pametrada) turbines, driven by superheated steam at 350psi, each developing 4,250shp.

The twin-screw ship achieved 21.95 knots during trials in the Firth of Clyde in May 1955.

Following the Steam Packet Company's introduction of car ferries in the early 1960s, the Manxman began to spend part of each winter in lay-up at Birkenhead. In 1967, the original two-class accommodation was converted to single class with a capacity of 2,032 passengers.

The Manxman two operated a year-round service between Douglas and Liverpool, as well as seasonal services from Douglas to Belfast, Dublin, Ardrossan, Heysham, Llandudno and excursions between Liverpool and Llandudno.

By 1981, the Manxman was the last of the King Orry class still in service and on 4 September 1982, the ship made a final return voyage between Liverpool and Douglas to end a 27-year career, in which it carried more than two million passengers.

How big was the Manxman two?

When did the Manxman two enter service?

The Manxman two entered service in 1955.

When the Manxman two was sold in 1982, what did it become?

The Manxman two was a successful nightclub in Preston until it was sold in 1984.

When was the Manxman demolished?

The Manxman was demolished in 2012 after a failed attempt to turn it in to a heritage centre.

The Manxman two appeared in several popular films including Chariots of Fire, The Missionary, SOS Titanic and Yentl.

After a brief period in lay-up, Manxman two was sold and sailed in October 1982 from Liverpool to Preston, with plans for conversion into a floating museum and visitors centre. When this proved unsuccessful, the ship was sold in 1984 and turned into a restaurant and nightclub.

This new role was a financial success, but Manxman was forced to return to Liverpool in November 1990, when Preston Docks were redeveloped. Manxman was a less successful nightclub in Liverpool's Waterloo Dock and the ship was moved to Hull in 1993 and on to Sunderland in 1997.

In 2002, a major campaign was launched to restore the ship for it to serve as a Merseyside heritage centre. However, in 2008 the charity that was seeking to preserve the Manxman was wound up following the failure to secure an agreement on a Merseyside berth for the vessel, despite feasibility studies showing the viability of the plans. The money it had raised was given to the paddle steamer Waverley and the tug Brocklebank, and the Manxman two was finally demolished at the Pallion Engineering yard in Sunderland in the first half of 2012.

Launched in August 1914, the US-built Doulos claimed the title of world's oldest ocean-going passenger ship for many years.