The Seafarers' Charity has introduced a new fundraising appeal in support of the Merchant Navy Fund as part of its annual Fly the Red Ensign campaign for Merchant Navy Day on 3 September.

The Fly the Red Ensign Campaign highlights the UK's dependence on merchant seafarers, who are responsible for safely shipping more than 90% of the UK’s imports, and celebrates their contribution. Normally each year thousands of locations across the UK hoist the Red Ensign in recognition of current UK Merchant seafarers, and to honour Merchant Navy personnel who served during the First and Second World Wars.

This year, in recognition that the Covid-19 pandemic had a huge impact on Merchant Navy communities, and that many continue to need urgent support, the charity has urged support for the Fly the Red Ensign campaign and for donations to help respond to the increased need for support.

Chief executive of The Seafarers' Charity Catherine Spencer said: 'Merchant Navy Day is such a special day to recognise the incredibly important role of our seafarers. This year, as the impact of Covid-19 hits supply lines the public are much more familiar with how vital shipping is to keep shelves stocked.

'Our Merchant Navy have operated through the chaos of the pandemic to keep supplies moving, building on the long and proud history of supporting the nation in times of need, just as they did during World War One and Two. We hope you will join with us in Flying the Red Ensign to support seafarers and that you will consider donating to the Merchant Navy Fund.' 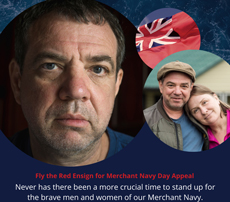 Aged 41, after six and a half years at sea, Samuel found himself without a job or a home.

In the weeks that followed while he searched for work, Samuel applied for Universal Credit to help cover essentials like food and finding a room to rent, but with no other income or savings, expenses like travel between job interviews became a luxury.

Samuel's situation grew worse as his debts mounted and the increased financial pressure started to have an impact on his mental health as well. Thankfully, he received some practical advice from his local Honorary Agent, a nationwide network of volunteers for the Shipwrecked Mariners' Society. They were able to assess his situation and provide some short-term support in the form of a few small payments to help with his living expenses.

Retired mariners at Nautilus Mariners' Park will mark the annual UK Merchant Navy Day by raising the Red Ensign in a dedicated outdoor ceremony, despite ongoing pandemic restrictions on many flag raising events for a second year running.

While the UK maritime community's commemoration of Merchant Navy Day on 3 September may be muted due to ongoing pandemic restrictions, Plymouth is still planning to celebrate in style at its Merchant Navy Monument.

This year's Annual National Service for Seafarers (ANSS) spearheaded by The Seafarers' Charity has been cancelled for a second year due to uncertainty over Covid-19 restrictions.