Nautilus Federation affiliate the Seafarers' Union of Croatia (SUC) has re-elected its general secretary Neven Melvan for a second term. The SUC works closely with Nautilus at the International Transport Workers' Federation (ITF) and has provided welcome solidarity during recent protests in London against the sacking of nearly 800 maritime workers at P&O Ferries.

SUC colleagues interviewed Mr Melvan in the run up to their 5th Congress, which was held in Dubrovnik from 27-29 April 2022.

What are your thoughts on your first term as SUC general secretary over the past five years?

This congressional period has shown the importance of being prepared for unforeseen circumstances. All the work plans which were presented and adopted at the previous Congress suddenly had to change when we were confronted with the Covid-19 pandemic – clearly this had to be a priority for us.

In particular, during the pandemic we were successful in changing the Croatian Maritime Code to recognise seafarers as key workers. We have also contributed to improved access to education and employment, alongside increased sick leave benefits.

What were the biggest problems facing SUC members and other seafarers during the pandemic?

The most dramatic issue was the crew change crisis. Parallel to this were the financial and administrative problems faced by Croatian seafarers – they were unable to reach the number of required sailing days to benefit from the tax arrangements in place for them. We were able to get the government to change this, and the modified scheme is still in force today. We also achieved priority testing and vaccination of seafarers.

The pandemic certainly proved the crucial role of the ITF inspectorate, especially those ITF inspectors working in Croatia who coordinated a large number of group and individual repatriations from ports along our coast.

Some of these repatriations were organised in cooperation with companies and intermediaries but sadly some companies used the opportunity to save on the number of seafarers' repatriations. Cooperating with seafarers, we have also successfully dealt with such situations.

I am especially proud of the quality and scope of work that the SUC team achieved, despite being faced with something that none of us have ever had to deal with before.

What other assistance have you provided to seafarers?

The SUC Solidarity Fund, in addition to financial support from the ITF Seafarers' Trust, assisted members who found themselves in financial difficulties as a result of being unable to reach their vessels to begin their contracts.

The Fund also financed the procurement of personal protective equipment such as gloves and masks, when faced with severe global shortages.

That increased attention helped SUC to influence our government to establish Croatia as one of the first countries to provide free Covid-19 vaccinations to seafarers of all nations alongside being able to provide proof of any necessary vaccination documentation.

How did the extraordinary circumstances of the pandemic affect the normal operation of the Union?

Not only did we have to respond to the pandemic, but we also had to continue our regular work. I'm pleased to say that none of our ordinary work was neglected.

We adapted the way of working for our SUC colleagues, when lockdowns prevented gathering, to enable a greater deal of virtual working online wherever necessary.

SUC actively takes part in the work of the ITF, ETF and the Nautilus Federation, benefitting our members directly but also seafarers as a whole The Seafarers' Union of Croatia general secretary Neven Melvan

What will stay with you the most from the previous five years?

The disappearance of sailors from the Bourbon Rhode vessel was the most stressful, emotional and demanding episode. Despite putting every possible effort into prolonging the search and rescue operation for the missing seafarers – working with international institutions and organisations such as EMSA, ITF, ETF, and the Nautilus Federation – they were not located.

The ability to conduct international affairs virtually brought with it certain financial and organisational relief. However, it is important to emphasise that online meetings cannot and must not replace the human, personal contact that we missed in part of that period.

Leading the strengthening of trade unions in the western Balkans, at the request and with the support of the ITF and ETF, has been a pleasure. We have already seen great levels of interest in unions wanting to take part in ITF/ETF activities and new affiliates joining – exceeding our expectations. We hope to see additional growth in the region.

SUC also leads on the 'Sea of Convenience' project, seeking to establish European conditions in the Mediterranean basin. This project has slowed down as a result of the pandemic, but we are sure it will be back on track soon with international support.

We actively take part in the work of the ITF, ETF and the Nautilus Federation, benefitting our members directly but also seafarers as a whole.

The expertise of SUC colleagues and the strength of our unions is recognised through the number of positions held by our team. We have positions in the ITF including the Executive Board, Seafarers' Section, Fair Practices Committee Steering Group, Fair Practices Committee, Resolutions Committee, Maritime Safety Committee and Cruise Ship Task Force. In the ETF we also hold positions on the Management Committee, Executive Committee and Maritime Transport Section. SUC colleagues also take part in numerous IMO, ILO and EMSA forums.

How has dealing with the impact of war in Ukraine affected SUC?

Sadly, it is inevitable that there will be a large impact on seafarers from both Ukraine and Russia.

We have little influence over these tragedies, but we can work to help affected trade unions continue their services to reduce the impact on seafarers, their families and on the maritime sector as a whole.

In that regard, we have offered the Maritime Transport Workers Trade Union of Ukraine (MTWTU) space in our head office in Rijeka, should the need arise for them to evacuate their Odesa office. We have also offered to assist with the relocation of MTWTU colleagues' families.

Croatia was faced with a similar ordeal in the 1990s, which many of my colleagues remember all too well. Our support for MTWTU colleagues is without question and we are ready to take whatever steps we can to help them.

What are the plans for your new term of office? Do you have a message for seafarers?

The work we have done in the last congress period is thanks to the dedication of colleagues with whom it has been a pleasure to work. I am committed to maintaining and improving our professionalism for the benefit of SUC members.

I have been happy to see growing numbers of young members taking a more active part in union activity. I am confident that their activity and their work will guarantee the future of the Seafarers’ Union of Croatia. 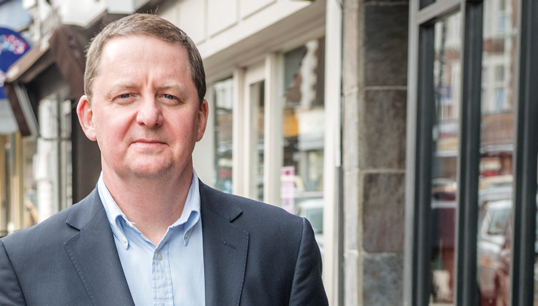 Mark Dickinson, general secretary of Nautilus International and director of the Nautilus Federation, addressed the opening ceremony of the SUC Congress:

'There have been several challenges facing the maritime industry in the past few years not least the global pandemic. The leadership of maritime trade unions under the auspices of the ITF and ETF alongside that of the International Chamber of Shipping and the International Maritime Employers’ Council has delivered solutions to problems faced by our members, and we now must continue to develop the partnership that we built. This will be to the benefit of the industry but must also see seafarers gain better wages, conditions, training, and career prospects.

'Neven must be congratulated for his role internationally and for leading such a strong union through difficult global conditions. His leadership of the Seafarers’ Union of Croatia has seen the organisation develop and grow, making the ETF, ITF and Nautilus Federation stronger as a result.'

Steve Cotton, ITF general secretary, said: 'There are lots of lessons to be learned from Covid-19. One of these was our ability to collaborate. Collaboration between unions - ITF and ETF affiliates - has become much more sophisticated and seeing such a great number of maritime trade unions from across the globe here is testament to the SUC’s contribution to our successes.'

Danny McGowan, international organiser at Nautilus and coordinator of the Nautilus Federation, provided some practical advice to a young members meeting at the Congress:

'It is important from an early stage in your career to know that in our global industry, there are organisations that can help you globally. The Seafarers' Union of Croatia is an affiliate of the Nautilus Federation, which operates the Nautilus 24/7 helpline and the Joint Assistance and Support Network (JASON).

'The JASON scheme ensures that reciprocal advice and support can be provided to union members if they are involved in an incident within a port, territory, territorial waters or onboard a vessel flagged in one of the countries covered by the agreement.

'Hopefully you never need to use it, but it is important to know that it is there should you or a fellow union member be faced with such a situation.'

Time to take a fresh look at cadet training targets