The Liverpool maritime community will continue to benefit from the work of local campaigner Bill Anderson despite his untimely death in October 2020 after a diagnosis of Covid-19.

After a career at sea and on the staff of the National Union of Seamen, Mr Anderson was in retirement instrumental in launching an appeal for a Liverpool Battle of the Atlantic Memorial, dedicated to all combatants of all nationalities.

The fundraising for this stone memorial continues, with the aim that it will one day be installed on Liverpool pier head. 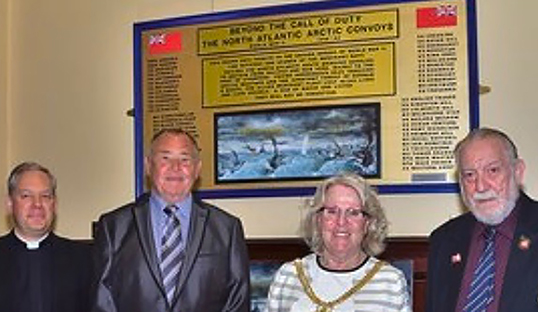 He also commissioned two rolls of honour for the fallen of the Battle of the Atlantic. One was dedicated to Merchant Navy personnel, which he saw installed at Liverpool Town Hall (Mr Anderson is right of picture at the unveiling). He also planned a larger board with a broader range of fallen combatants listed.

Created, like the earlier roll of honour, by craftsman Neville Greenhalgh, the large board contains tributes to the port and city of Liverpool, the British Merchant Navy, the Irish Mercantile Marine, the Coastal Command/Fleet Air Arm and the Royal Navy. Also mentioned are the Royal Canadian Navy, the United States Navy, associated merchant navies and dock and shore side support workers.

Bill Anderson provided most of the information and approved the original drawing. He lived to see it completed but will sadly not see it displayed in its future home, the Battle of the Atlantic Experience at Liverpool's Western Approaches HQ Museum, where it will stand in tribute to his campaigning as well as to the fallen.

Poem: The Merchant Navy at War

Nautilus has been sent a poem written by William 'Bill' Dempster Johnston (2 April 1920 – 9 September 2002), who was a Merchant Navy chief engineer from Glasgow. In the Second World War, he served in the Atlantic and Arctic Convoys, but according to his family, he never spoke about his experiences. To their knowledge, this poem has not previously been published.

It is thought that Dempster wrote the poem in the 1990s, as 1995 marked the 50th anniversary of the end of the Second World War. His daughter Margaret found the poem amongst his belongings after his death in 2002. He had contracted mesothelioma, a lung cancer associated with asbestos, which he would have encountered regularly in the insulation on ships’ boiler pipes.

Without them, all the efforts of the others would be in vain
So grant these men their courage, their anguish and the pain
Quiet and unheralded, they sailed the convoy lanes
To bring a needful country: the food, the arms, the planes.

The engineer and firemen on their platforms far below
Before the fiery furnace and the engines' steady throw
Are steadfast in their duty, 'spite their handicap to hell;
And, through the constant danger, in which they ever dwell.

The officer or rating, watch-keeping through the night,
Find little ease or comfort with the coming of the light;
For dusk and dawn are perilous, as very well they know
The time a lurking enemy sends many a ship below.

This, then, the Merchant Navy, those comrades hardly met,
Who sailed the several oceans, defying every threat;
Shipmates all together, they shared the constant strain
Of submarine and raider, torpedo, mine or plane.

But they remained constant, when the darkest night was long;
And now that many of them have slipped their hook and gone:
Remember those remaining, such fast reducing few;
And don't forget the others: that silent, ghostly crew. 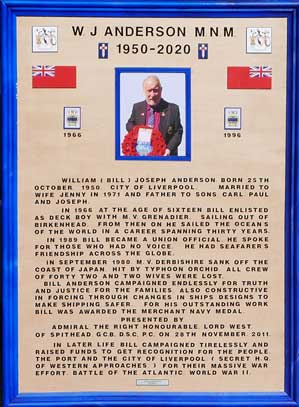 Former Merchant Navy Medal awardee Bill Anderson had his lifetime of service remembered posthumously in an honours board in the Liverpool Seafarers' Centre. Unveiled in December 2021 by Mr Anderson's widow Jenny and politician brother Joe, the board recognises the late bosun's tireless work for the Derbyshire families and Merchant Navy veterans.

The sad news of the sudden death last week of former RMT official Bill Anderson has reached Nautilus International. General Secretary Mark Dickinson who worked with Bill over many years recalls with fondness his dedication.