Fair Society: Campaigning for a just transition to a more sustainable society

The Fair Society campaign seeks to improve the environmental impact of shipping and promote a 'just transition' to greener methods, to monitor the impact of automation, and to ensure that seafarers' jobs, health, and safety are at the heart of industry developments

1. Participation in the development of future maritime training
2. Pay protections for kidnapped seafarers

The road to net zero

Nautilus is working to ensure seafarers are included in the maritime industry's transition to net zero emissions, so that their safety and jobs are protected as new technologies emerge.

Nautilus has called for a commitment from industry and government to help fund the retraining of Merchant Navy officers who may miss out on these new skills because they went through their training before they were offered. The Union believes that any company that benefits from government funding for 'green' technology development should be required to pay for course development and retraining of seafarers.

In the lead up to the COP26 climate conference, Nautilus Council member Captain Fraser Matthew spoke at the launch of the International Transport Workers’ Federation (ITF) Sustainability Roundtable, voicing the concerns seafarers have in the transition to a sustainable shipping future.

Capt Matthew raised concerns over the criminalisation of seafarers over the use of alternative fuels. 'Regarding this move now to lower sulphur fuel; unfortunately due to legislation it has become the responsibility of the master. The master can take delivery of a low sulphur fuel and, if it unfortunately fails the tests, is then liable. I don't understand how somebody could be liable for something that has been delivered, but there is a worry that the criminalisation of seafarers is only going to increase as we move to all kinds of fuels, more dangerous fuels. The working environment will also become more dangerous if it hasn't been risk assessed and support for training provided.'

At COP26, second engineer Allan Dickson told the Maritime Skills Commission (MSC) Green Skills Forum that it is fundamental maritime professionals receive training in environmentally friendly skills and new technologies. He drew upon his own experiences and the lack of training on the technologies of the future that would help reach net zero during his cadetship and 15 years at sea.

He said that the term 'smart shipping' has been used by the maritime manufacturing industry to create the image that people no longer want to work at sea, when all the term really means is that new generations of ships are being created and are moving with the times, as they always have done.
He emphasised the importance of proper investment in training, 'Programmes do not keep pace with technical developments, which is why recent graduates are lagging behind. These people then do not get enough time onboard to adapt.'

There is a clear need for proper training for seafarers both current and new entrants to the industry.

Nautilus was involved in drafting landmark legislation which ensures the protection of pay for seafarers captured by pirates.

On 26 December 2020, amendments to the Maritime Labour Convention (MLC) came into force, which ensure that the Seafarers Employment Agreement (SEA) stays in place while a seafarer is held captive by pirates on/off ship. This still applies even if their contract expires or is terminated by the shipowner.

For seafarers, this means that they will be paid their full wages whilst in captivity and receive any other entitlements due from employers under the terms of their SEA, collective bargaining agreement or national law of the flag state. These entitlements could also include holiday pay and pension contributions. 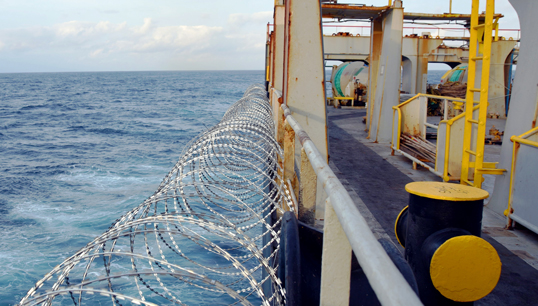 Seafarers working on vessels that are covered by the International Bargaining Forum and ITF Total Crew Cost collective bargaining agreements are entitled to be informed at the time of assignment if the vessel is bound for or may enter any Warlike Operations or High-Risk areas, and an up-to-date list of IBF Warlike Operations areas should be kept onboard and made accessible to the crew.

Seafarers are also entitled to know if they are entering a Warlike Operations area while at sea. Seafarers working on ships that are scheduled to enter these areas can refuse to sail and seek repatriation.

UK-based body the Warlike Operations Area Committee is comprised of the trade unions Nautilus International and RMT, and the UK Chamber of Shipping. It designates areas (e.g. the Strait of Hormuz) as high risk, and seafarers due to transit the area on UK and Red Ensign Group flagged ships have the right to refuse to join an unaccompanied ship or can request to leave the ship at a preceding port.

Fair Treatment: campaigning to end the criminalisation of seafarers

Fair Access: campaigning for equal opportunities in training and careers

Fair Workplaces: campaigning for safety onboard and onshore