While we've all been preoccupied with the pandemic, the need for the shipping industry to cut its emissions has not gone away. Battery-powered vessels are likely to play an important part in this clean-up effort, but seafarer representatives say that urgent work is required on safety standards, firefighting equipment and crew training. Sarah Robinson finds out how the coming electric revolution looks from the perspective of a Nautilus Federation union

Like electric cars, battery-powered ships provide a way of improving air quality where they operate – doing away with the SOx, NOx and particulate pollution associated with diesel engines. They can also help to reduce CO2 levels in the world's atmosphere, as long as the electricity used to charge them is generated by renewables such as wind, solar or hydroelectric power.

'It's the future – especially for shortsea shipping and inland waterways,' says Odd Rune Malterud of the Norwegian Union of Marine Engineers. 'We have to do it. But we must do it safely, and we must have unions around the table.'

As assistant director and technical manager for his union, Mr Malterud often speaks for seafarers at the International Maritime Organization (IMO). And he's very keen to see that crew safety is prioritised as fully-electric propulsion becomes more widespread.

'The problem is that we don’t have international standards for battery-powered vessels, which are fine almost all the time but can be very dangerous if something goes wrong,' he points out. 'We need special firefighting equipment and crew training that is quite different from what they get at the moment.'

Although there have thankfully been no major accidents on the few fully battery-powered vessels already in operation, one incident we should be learning from is the 2016 case of Samsung's overheating smartphones. Stories of the Galaxy Note 7 model catching fire and even exploding were all over the news that year, and Mr Malterud says we would do well to remember this when developing similar lithium batteries for ships.

'The best thing you can do when a battery like this is on fire at 1,600C is submerge it in fresh water and wait until the fire burns itself out underwater,' he stresses. 'You can’t use salt water, as that makes it worse, which we saw in an incident on the battery hybrid ferry Ytterøyningen last year. So the vessel needs to carry enough fresh water onboard and have a way to seal the casing around the battery, while also dealing with the toxic gases that will be released. And don’t forget that the power for the fire and bilge pumps has to come from somewhere, so what do we do if all the ship's power comes from a battery that is out of action?'

Another issue to consider is charging. The vessels we are talking about here are fully electric, not hybrids, so they need to charge whenever they dock. 'It's quite tricky,' says Mr Malterud. 'If you use an automatic arm that connects the ship to the power when it berths, it can be difficult to get a connection with the up and down movement of the tides. Wireless charging is being developed but it's not in use yet. We have to be very careful with this, because the charge is at such high voltage that it can kill a person instantly, and civilians can be around where the supply cable is.'

If all this sounds rather downbeat, that is not Mr Malterud's intention. He is pleased to see shipping getting its environmental act together, but with battery-powered vessels set to become more common, the need for standards governing their operation becomes ever more pressing. The good news is that work is underway at an international level to rectify this situation, issue by issue. In March this year, for example, the IMO Sub-Committee on Ship Systems and Equipment agreed to draft a new interim guideline on the safe operation of shore power for ships.

The International Transport Workers' Federation (ITF) is also involved in the standard-setting work, and Mr Malterud is the chair of the ITF Maritime Safety Committee. In a December 2019 information paper on new fuels and seafarers' competences, the ITF pointed out that the IMO Standards of Training, Certification and Watchkeeping (STCW) convention requires personnel on certain types of ships have to have specific additional training and familiarisation. In the case of battery-powered vessels, the ITF information paper says:

This has formed the basis for collaboration between ITF affiliate unions in a working and correspondence group. The Norwegian Union of Marine Engineers is particularly well-placed to contribute to this, because Norway is arguably the world leader in battery-powered vessels. The Norwegian company ABB is a major manufacturer of ships' batteries, and some are already in regular use on cruise ship tenders carrying visitors to the country’s famous fjords, where air-quality legislation prohibits heavy fuel oil.

Norway is also known for having introduced a fully battery-powered ferry – the Ampere – as long ago as 2015. The lessons learnt from developing and operating this vessel are proving invaluable to the effort to draw up international safety standards, and Ampere's chief engineer Frank Kristiansen has been working closely with Mr Malterud on their union’s contribution to this.

The ITF working and correspondence group has continued to operate during the first few months of 2020, and has produced a statement on 'Environment and issues affecting seafarers' safety'. The group was scheduled to report to the IMO Maritime Safety Committee at its next session on 13-22 May, as well as to the IMO Sub-committee on Human element, Watchkeeping and Training on 1-5 June, but these sessions have both been postponed due to the Covid-19 coronavirus pandemic.

At the time of writing, no new dates for these IMO committee sessions had been agreed, which is frustrating for those who have been working to introduce amendments to the STCW Code and other relevant sets of regulations such as the International Code of Safety for Ships using Gases or other Low-flashpoint Fuels (IGF Code).

'The virus has taken us all away from this, and that’s no good because the vessel manufacturers are going ahead without us,' laments Mr Malterud. 'We have regulations for nuclear-powered ships dating all the way back to 1955, but nothing for batteries or most other new fuels, so this must be a priority as soon as the IMO committees start up again.' 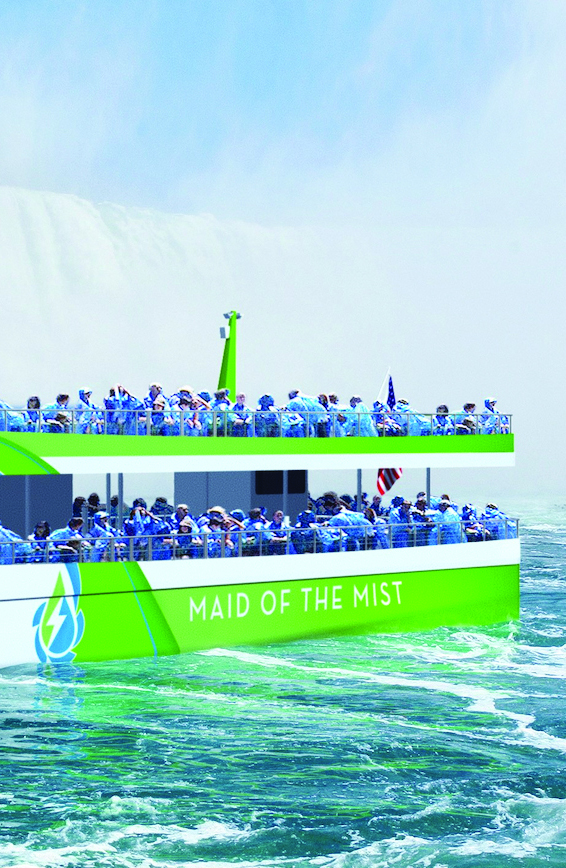 A landmark in the world's adoption of battery-powered vessels could be witnessed in 2020, with the world-famous Maid of the Mist tour boats at Niagara Falls going electric.

Claimed to have zero emissions, the vessels' green credentials are to be enhanced by charging with electricity generated using the falls themselves.

The two electric catamarans (pictured as an artist's impression) are named after Maid of the Mist CEO James V. Glynn and energy pioneer Nikola Tesla, who had the idea in the early 20th century of using Niagara Falls as an electricity generator.

Classed by the United States Coast Guard (USCG) as subchapter K vessels, the tour boats were built in the USA with batteries from the Norwegian firm ABB.

The vessels are now awaiting final regulatory review as well as the easing of the Covid-19 coronavirus pandemic, so the plan for them to enter service in spring 2020 has had to be revised, but there are still hopes that they will be launched later in the year.

As work continues at the IMO on global safety and crew training standards for battery-powered vessels, the EU has developed the world's largest fully-electric ship as a working prototype for future European ferries

In commercial operation since August 2019, the Danish island ferry Ellen is the product of a four-year, €21.3 million 'E-ferry' project funded by the European Commission and industry as part of the Horizon 2020 research and innovation programme.

Ellen is able to carry 31 cars or five trucks, and as many as 198 passengers at capacity, sailing between the Danish ports of Søby and Fynshav. It’s a distance seven times greater than that covered by the vessel's Norwegian predecessor Ampere, and Ellen's battery capacity is four times larger.

Henrik Hagbarth of the Danish maritime college Marstal Navigationsskole has been involved with the development of Ellen since 2013, when he was the coordinator for the feasibility study. He now teaches battery operation and safety and is working on the E-ferry project's evaluation report.

'We are using two AC reluctance permanent magnet high efficiency engines of up to 750 kW each,' says Mr Hagbarth. 'This gives us a service speed of around 13 knots and top speed of around 15 knots. The ferry is also equipped with a couple of bow thrusters for manoeuvring purposes. All power is supplied by two independent battery rooms. These are also approved for emergency power units, which means that Ellen is the first battery ferry approved to run without any kind of fossil emergency generators at all.'

Now approaching the end of its EU demonstration period, the ferry is considered to have performed very well on speed, energy consumption and reliability.

To address the thorny fire safety issue, a special foam fire extinguishing system has been adapted which is claimed to cool fires in lithium-ion batteries more effectively than the water mist standards seen on other battery ferries. 'At the same time,' says Mr Hagbarth, 'Ellen's batteries are liquid cooled, which makes a big difference in daily operation and a very efficient first barrier to thermal runaway issues.'

From the environmental perspective, the vessel is charged using some of the greenest electricity in the world, with half of Denmark’s power having been generated by wind and solar power in 2019. Studies are also underway to look at the overall climate impact from the electric operation of ships including production of batteries.

All in all, argues Mr Hagbarth, battery operation is a 'no-brainer' in shortsea shipping. 'The climate impact is reduced by magnitudes of order, operating and maintenance costs are reduced, and even crew costs are reduced in some cases. The investment costs for the first prototypes have been somewhat higher than conventional fossil power, but our recent evaluation of present battery prices and power electronics indicates that price difference to fossil engines in maritime applications is also levelling out now.'