Home News & insight Ships of the past Priam

The Priam entered service in December 1966 and was described as the 'ultimate conventional cargo liner,' known for its high standards of accommodation for crew members. 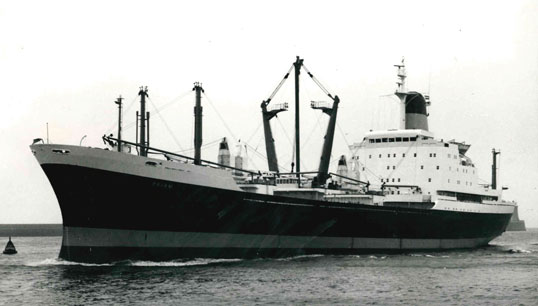 The Priam was built by the Vickers Group on the Tyne and was one of the first of eight ships in the 'Super P' class. The 12,094grt Priam was one of the last Blue Funnel ships to be built in the UK. It had a capability of 21 knots.

At 536ft 6in long, the Priam had six cargo holds and 13 deep tanks, three of which were lined with stainless steel for the carriage of chemicals. The three main cargo holds were designed to carry containerised cargo when required. The vessel was powered by a nine-cylinder Burmeister & Wain diesel engine developing 18,900shp at 100rpm. The entire engineering installation was designed to be operated by just one officer while at sea and to be unattended in port.

In a departure from the traditional appearance of Blue Funnel ships, the Priam had a medium-size bulbous bow and an open-water stern. This was a feature first used by the company in 1899 and was brought back to enable the high-powered ships to benefit from the greater propeller clearances offered by a clear water stern.

The Priam class of ships were designed to operate with crews of 43. They were known for featuring high standards of accommodation for crew. Air conditioning was provided throughout the ships and the floor area devoted to each crew member was at least double that of comparable ships. All officers and petty officers had individual bathrooms with a toilet and shower, and most ratings had their own cabins.

However, this made the Priam class comparatively expensive to operate, making it difficult to compete with the increasing pace of containerisation.

When did the Priam enter service?

How big was the Priam?

When did the Priam end its service?

The Priam ended its service in 1985 after it was struck by a missile during the Iran-Iraq conflict.

The Priam was sold to the Hong Kong owner CY Tung in 1978 and renamed the Oriental Champion. Under CY Tung's ownership it was lengthened by 78ft and converted into a full containership of 14,262grt.

The former Priam was then sold to Vanderhoff Shipping of Panama in 1982, and in 1984 it was purchased by Wattling Navigation of Panama. It remained with Wattling until 1985, when in November it was hit by a missile in Bahrain during the Iran-Iraq conflict. The cost of repairs was deemed uneconomical; therefore, it was towed to Kaohsiung in Taiwan for demolition in February 1986.

A 'gifted' ship: Keith Blundell shares his late father Ronald's mementoes from his maiden voyage on the Priam, including the story of a gift from Japan. Read more...