Nautilus International, the UK Chamber of Shipping (UKCS) and the National Union of Rail, Maritime and Transport Workers (RMT) have called on the new maritime minister to ensure that seafarers receive the financial support they need as the government transitions to its new Job Support Scheme.

The Job Support Scheme begins operation on 1 November. It is intended as a scaled-back version of the previous furlough programme, the Job Retention Scheme (JRS).

However, although many seafarers received financial assistance under the JRS or the Self-Employed Income Support Scheme (SEISS) during the Covid-19 pandemic, thousands of others were not considered eligible for any support at all including seafarers serving on a ship registered outside the UK or those employed on a fixed-term contract.

In a letter to Robert Courts MP, who took over as maritime minister from Kelly Tolhurst this September, Nautilus general secretary Mark Dickinson joined the RMT and UKCS leadership in highlighting the plight of seafarers who are facing financial hardship.

'We the social partners for the UK maritime sector seek your urgent assistance to ensure that UK seafarers whose livelihoods are under threat as a result of the Coronavirus pandemic are provided with a sufficient level of government support over the forthcoming months,' Mr Dickinson said,

'Despite the recent announcement of the Job Support Scheme, there is now a serious danger of large-scale job losses amongst UK seafarers. Those sectors of the industry that have had their activities curtailed, as well as those that are suffering because of the collapse in the price of oil, will be quite unable to sustain the employment of large numbers of their crews.'

The full text of the letter is attached below. 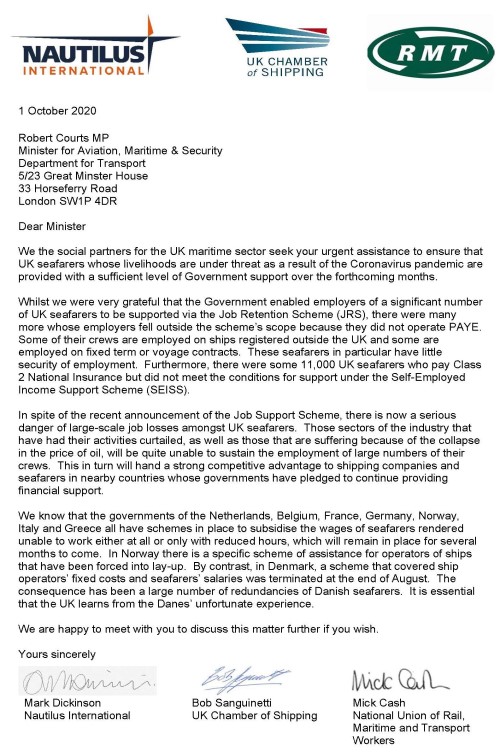 P&O Ferries plans to scrap its Hull-Zebrugge route and make maritime professionals redundant have been slammed by Nautilus International as reckless and potentially putting negotiations with the union at risk.