The hybrid in-person and online Pride in Maritime Roundtable seminar hosted aboard HQS Wellington looked at how the industry can continue to be made more welcoming to LGBT+ people, as well as hearing about current initiatives. The roundtable was the second in a series held under Maritime UK's Diversity in Maritime umbrella, but the first such event to be held at LISW.

Nautilus official Danny McGowan who is chair of the Maritime UK Pride in Maritime Network commented: 'It's pleasing to see that the industry recognises that although we've made progress for LGBT+ people in maritime, there is still a lot of work to be done, both here in the UK and further afield.

'Recognising the importance of visibility of LGBT+ people in senior positions, alongside the support of allies in senior leadership positions, is something that will make a big difference for LGBT+ people across our industry.'

The seminar also heard about the need to address safety concerns for crew and shoreside staff sent abroad to areas where diversity in sexuality is not recognised, or still illegal.

'Recognising the safety and security of LGBT+ people – seafarers and shoreside workers – who often travel to parts of the world where legal and societal views on diverse sexuality differ to those we have in Europe, will again ensure that people who have fears about their assignments will know where they can go for support,' said Mr McGowan.

He emphasised the importance of communication about LGBT+ matters in maritime, saying: 'I urge all of those taking part in this Roundtable to advertise the work of the Pride in Maritime Network to their contacts, employees and friends. Our work is picking up interest in many parts of the world, and the more we talk about it and publicise that, the better for the UK maritime industry and for our LGBT+ colleagues.'

The in-person event was also attended by Jacqueline Smith of the International Transport Workers' Federation, Daisy Rayner of the Shipowners' Club, and Les Chapman of the Honourable Company of Master Mariners.

The Natural Environment Research Council (NERC) was represented among the online participants and shared its work on expeditions including its diversity in science initiatives.

Seminar participants were particularly interested in the UK Royal Navy's experience of progressing diversity for its LGBT+ staff, and how that could be emulated in the merchant fleet. RN initiatives include establishing the Compass network, efforts to implement inclusive language, and a new process of nominating senior staff such as admirals as champions to take its work further. Like many organisations, however, the Navy struggled to get baseline benchmarking statistics on the extent of its LGBT+ community, because even though it has systems in place that allow people to indicate their sexuality, only 20% choose to do so.

Ms Rayner agreed that having straight allies from other industries who are able to speak up was important.

Several participants in the commercial sector indicated the maritime industry still had a way to go to become welcoming. 'Working internationally, for example, is always very challenging due to different laws', said Ms Smith.

Chrissie Clarke, Maritime UK's head of diversity and secretary to the Maritime Skills Commission, summed up: 'We were delighted to host our first live streamed Roundtable for Pride in Maritime to share ideas and practical solutions for how to ensure maritime is welcoming for LGBT+ people.

'We are grateful to everyone that participated in the session. Whilst we have a long way to go, conversations like today are so critical to breaking down barriers faced by members of the LGBT+ community. We urge allies to join the network to ensure they can stand shoulder to shoulder with our LGBT+ employers and assist to progress these critical conversations.' 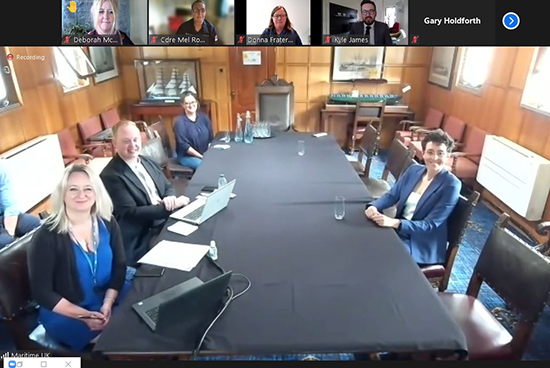 Next steps for increasing visibility on LGBT+ for maritime professionals include a Pride in Maritime Day on 28 February 2022.

The UK National Inclusion Week from 27 September to 3 October 2021 includes a Maritime UK Pride in Maritime and Mental Health in Maritime 'lunch and learn' webinar on 28 September at 12 noon, highlighting some positive stories on transitioning.

The next Pride in Maritime Network event will be held on 13 October 2021, with the next round table due in late November or early December.

The Nautilus International/Maritime London Sea to City networking initiative seeks to plug the gaps in knowledge by pairing seafarers looking to move ashore with maritime professionals in the services sector.

As the maritime industry looked back on a hugely challenging year for seafarers, a conference held by maritime charities for London International Shipping Week (LISW) heard how the pandemic had amplified the needs of seafarers with regard to connectivity at sea.

A panel of industry leaders at London International Shipping Week has identified geopolitical tensions, piracy, cyberattacks and pandemics as key security threats to the maritime industry.