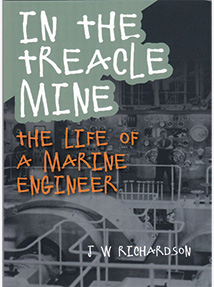 Young John Richardson was a great steam train enthusiast in the 1950s and 1960s, but by the time he was preparing to leave school, it was clear that a career on the old rail locomotives would not be on offer for much longer.

However, a somewhat reluctant trip to his school library revealed that steam engines were still in use onboard ships, and thus began a distinguished career in marine engineering.

Starting with his college days at Poplar Tech in London, In the Treacle Mine follows Richardson's seafaring years as he rose through the ranks on Esso and Mobil tankers and ended up as a chief engineer on a variety of vessels including Hoverspeed's Seacat channel ferries – finally coming ashore as a surveyor in 1993.

The memoir includes some familiar tales of life at sea, with all the quirky characters and interesting places you'd expect. But what really stands out is how well Richardson communicates his passion for engines and engineering, writing of his work in an engaging and accessible way that could well inspire others to follow in his footsteps.

As the author himself says, he is filling a gap in the market by doing this, because most seafaring memoirs are by deck officers. Publisher Whittles has also done Richardson proud with solid editing and presentation, including a photo section and a useful list of all the ships the author served on.

In early 2022, the Nautilus Telegraph published an appeal by the British Modern Military History Society for Merchant Navy veterans of the Falklands conflict to share their experiences for a new book. The result is Glimpses of the Falklands War.

From War to Peace: The Conversion of Naval Vessels after Two World Wars by Nick Robins