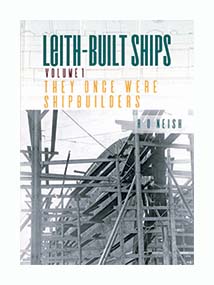 You could be forgiven for thinking that a three-volume series about the history of shipbuilding in the Scottish town of Leith might be of relatively limited interest. However, author Ron Neish ranges far and wide in this, the first in the trilogy, bringing in a broad and engaging spread of social, economic and historical themes.

Subtitled They Once Were Shipbuilders, the book covers the formative years of Leith’s shipyards, running up to the end of the First World War. Whilst the Clyde is usually celebrated as the source of great ships, the book points out that Leith had been at the traditional heart of Scottish shipbuilding since the 14th century.

Ron Neish examines the factors which drove the rapid development of Leith’s yards in the 19th century, including the American civil war, the whaling industry and the emergence of significant local shipping companies, such as Currie Line, Ben Line and Gibson Line.

However, Leith’s yards were also able to secure a remarkable range of orders from around the world, with vessels going off to owners in such countries as China, the Philippines, New Zealand and Tasmania, or for service on the Orinoco or as a missionary vessel on the river Niger. One yard, R&F, also managed to secure a good chunk of the market for steam yachts, building around 90 of what were the superyachts of their time.

The book delivers some fascinating potted histories about many of the hundreds of vessels constructed in Leith during the 70-year golden period for British shipbuilding, noting that the yards were also responsible for some very innovative ships, such as one of the first to be designed with twin screws and one of the first with a triple expansion engine.

It all adds up to a very readable history, providing an excellent mix of social and political context to the technical and industrial achievements of the Leith yards.

Steamy saga of sea dogs from the age of sail

Bright memories of an American classic

The SS United States: ship of power, might and indecision by William H Miller

Brimming with nostalgia, this telling of the story of the SS United States highlights just how brightly the ship’s flame burned for its short 17-year career as an ocean liner.

In early 2022, the Nautilus Telegraph published an appeal by the British Modern Military History Society for Merchant Navy veterans of the Falklands conflict to share their experiences for a new book. The result is Glimpses of the Falklands War.