The Devil and the Dark Water, by Stuart Turton 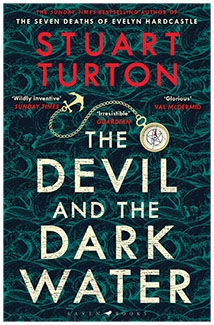 While The Devil and the Dark Water is no Seven Deaths, it does employ similar plot contortions, moral ambiguities and a galloping pace that makes for a very enjoyable whodunnit that will keep the reader guessing right up to the final chapter.

Set in 1634, The Devil follows the ill-fated journey of the Saardam, an Indiaman galleon owned by the United East India Company, from Batavia in the Dutch East Indies to Amsterdam. Aboard is a secret cargo that will make the Governor General of Batavia Jan Haan very rich and secure him a place on the ruling body of the Company – the wealthiest in the world at that time.

But no sooner is the ship out to sea than the devilry begins, with a strange symbol appearing on the sail and a dead leper stalking the decks. It's not long before more dead bodies start to wash up and wash out to sea and the characters start turning upon each other.

We won't give the plot away, but we will repeat a warning given by the author as the tale ends: this is not a 'boat book' nor a historical fiction. Turton has done his research, but chose to wilfully ignore some of it in order to tell a better tale.

He specifically plays fast and loose with the crew of the Indiaman, which would have had dozens of officers all vital to the running of the ship. In the novel, this is pared back to three, only one of whom was allowed to navigate. The technology is also more advanced than it should be, and historical facts are moved around to suit the plot. As Turton says: history is the fiction here.

If that annoys you, then you probably shouldn't attempt The Devil. If you're more cavalier with your 'alternative facts' then there are enough universal truths of the sea to make it well worth packing for your next trip – such as a trading company that cares more for its cargo than the crew, and a hierarchy onboard that brooks no dissent.

This is a perfect novel for an onboard swap library; the type where you leave a book for each one you take, if such things still exist. Your shipmates may scoff at the 17th century belief in the supernatural, but they will respect the might of the sea that ultimately holds the characters' lives in its power.