An impressive body of data on European maritime casualties and incident investigations has been built up over the last few years by the European Maritime Safety Agency. Sarah Robinson takes a look at the latest annual overview of this resource to get an idea of the type of information it contains and see whether any trends are starting to emerge from the statistics

Cargo ships are still proving to be the most hazardous maritime workplaces, according to new figures from the European Maritime Safety Agency (EMSA).

The data in the 2019 EMSA report was gathered in 2018 via the European Marine Casualty Information Platform (EMCIP), a centralised database for EU member states to store and analyse information on marine casualties and incidents.

The figures show that in the European cargo sector, there were 36 fatalities and three ships lost in 2018. In fishing – another sector with an unenviable safety record – the number of reported 'occurrences' involving fishing vessels increased by 40%, and there were 11 lives lost and 12 vessels lost.

With 3,174 marine casualties overall reported in 2018, the total number of incidents recorded in the EMCIP database has now grown to over 23,000 since data collection started in 2011, says EMSA.

There have been an average of 3,239 marine casualties or incidents per year over the past five years.

During the 2011-2018 period, 426 accidents resulted in a total of 696 lives lost. Crew have been the most impacted category of victims over this period, with 566 fatalities. The number of fatalities recorded in 2018 is 53, which is higher than the annual figure for the previous three years.

In 2018, there were 941 injured persons reported. This number has remained relatively steady in the last four years, at an average of 989 per year.

Almost half of the casualties that occurred onboard a passenger ship involved a ro-ro vessel. There were three ships lost in this sector in 2018, and while the number of fatalities has generally been on a downward trend since 2011, two more lives were lost in 2018 than in 2017.

The 'other ships' category appeared to be one of the safest. In 2018, 167 vessels were involved in a marine accident, mainly inland waterway passenger vessels, recreational motorboats and sailing boats. Although four ships were lost, only one fatality was reported.

The EMCIP data includes information on the outcomes of incident investigations by national maritime authorities.

In the EMSA report, an aggregation of these investigation findings from 2011 to 2018 shows that more than half the incidences of damage to a ship (54.2%) were related to issues of a navigational nature, such as contacts, grounding/stranding and collisions. As regards harm to people onboard, 39.2% of incidents involved slipping, stumbling and falling.

The departure phase appeared to be the safest phase of a voyage and mid-water the most unsafe. It was noted that 78% of the casualties occurred in internal waters and territorial seas.

Human action was found to be the main contributing factor in 65.8% of incidents, with the majority relating to shipboard operations, although a quarter of this 'human action' was by shore management.

EU member state investigation bodies launched 1,377 investigations over the 2011-2018 period and 1,212 reports have their status recorded as 'finished'.

Looking at the 2019 EMSA report as a whole, Nautilus professional and technical officer David Appleton commented: 'Although the casualty trends have been steady over the last few years, in the reference period 2011-2018, the overall trend is upwards in all categories of incident, which is very concerning. It is particularly disappointing that over 40% of recommendations made following investigations have been refused or ignored.' 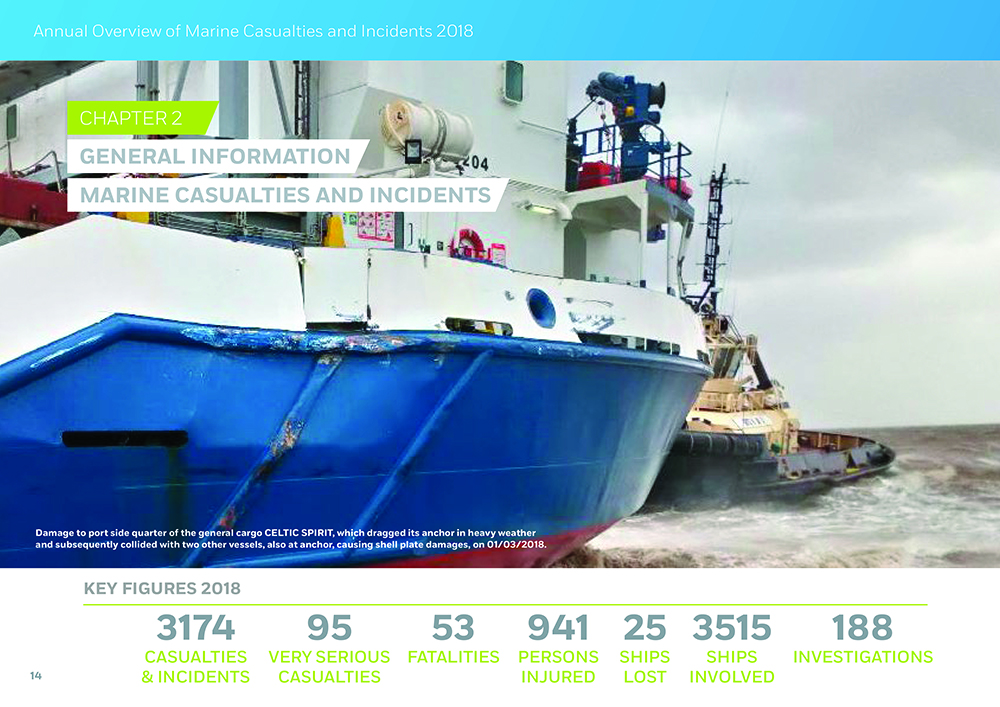 A marine casualty means an event, or a sequence of events, that has resulted in any of the following which has occurred directly in connection with the operations of a ship:

A marine incident means an event, or sequence of events, other than a marine casualty, which has occurred directly in connection with the operations of a ship that endangered, or, if not corrected, would endanger the safety of the ship, its occupants or any other person or the environment.

Neither a marine casualty or marine incident include a deliberate act or omission with the intention to cause harm to the safety of a ship, an individual or the environment.