Positives and pitfalls of social partnerships

The workings of international membership bodies can seem rather labyrinthine, but a great deal of cooperative work goes on behind the scenes to achieve legislative and policy outcomes that benefit the world's seafarers. Sarah Robinson looks at how two major international union federations maintain sometimes fractious relationships with shipowner groups in order to influence the big decisions

What happens if this is taken a step further, though? Should unions be forging alliances with bodies whose aims could be at odds with theirs?

This is the challenge at the heart of the 'social partnerships' between maritime unions and shipowner associations at European and global level. In the case of the ETF, the social partner is the European Community Shipowners' Associations (ECSA), and for the ITF, it is the International Chamber of Shipping (ICS).

'If unions and employers are together, it's very hard for politicians to say no,' says ITF maritime coordinator Jacqueline Smith. ETF head of maritime Estelle Brentnall agrees: 'We are more listened to when we come to the EU as social partners.'

The kinds of issues which work best in these partnerships tend to be 'softer' ones like skills, training, health and safety, Ms Brentnall adds. The European social partners have worked together effectively in developing the SkillSea project, for example, which set out to identify the skills European maritime professionals (including the UK) will need in the years to come.

The EU values the European social dialogue highly as a unique process of industrial relations at European level, and it facilitates and funds the ETF-ECSA social partnership’s meetings – at which Nautilus general secretary Mark Dickinson is the ETF spokesperson.

Nautilus involvement in the ITF-ICS partnership is also helping to ensure that issues of importance to members find their way to global policymakers, with one of the latest examples being a proposal to amend the Maritime Labour Convention (MLC) currently being considered by the ILO Special Tripartite Committee.

The proposal relates to personal protective equipment (PPE), which in this context refers not to the masks used during the Covid pandemic but to the clothing and breathing apparatus used when fighting fires or dealing with poisonous chemicals onboard ship.

The dangers of poorly-fitting PPE to female crew members in particular have been highlighted many times by Nautilus members, and the proposal now under consideration would see new international standards enacted to require shipowners to carry different sizes of equipment. Buy-in from the shipowners at the ICS makes it much more likely that the proposal will lead to genuine change, and the regular meetings of the ITF-ICS social partnership have helped to achieve this.

Aren't unions and employers supposed to be on different sides, though? Some would argue that the existence of social partnerships creates a risk of overly cosy relationships.

Where warmth turns to wariness

'There are many things we disagree on, but it's important to have a seat at the table,' stresses Ms Smith. 'The contacts we maintain at ITF-ICS level help us to support affiliate unions who may be facing challenges with a particular employer or national government.'

However, some issues are so contentious that they tend to be kept away from the social partnership sphere altogether, adds Ms Brentnall. Competition law is a case in point.

Unions want what's best for their members, which can mean supporting laws that require maritime employers to crew ships operating in a particular country's waters with seafarers from that country – and/or paid that country's typical wages.

Maritime employers often denounce this as 'protectionism', arguing that the only way for companies to thrive and remain competitive is by having the freedom to source labour from wherever they want and pay the lowest wages that a qualified seafarer somewhere in the world will accept for the job.

The battle of the reports

The ETF recently published a concept note arguing for a legally-binding European Maritime Space, within which 'EU labour and social law (European terms and conditions of employment) should … apply to all seafarers working on vessels regularly operating in EU/EEA waters, no matter the flag they fly.'

Not long after this, the ICS came out with two of its own reports claiming that the best way forward for the international shipping industry is to reduce existing curbs on free capitalism: the Protectionism in Maritime Economies Study and The Perfect Storm – which focused on how the shipping industry should recover from the Covid-19 pandemic). While the latter does include calls for high quality maritime training and fair labour laws throughout the world, it also makes the following points that sent shockwaves throughout the international maritime union movement.

The report calls on the IMO, ILO and national governments to ensure the labour market for seafarers 'remains global and open'. These bodies should 'strive for a forward looking, rules-based multilateral trading system, underpinned by global cooperation that extends to the labour market', and 'promote free and fair competition in shipping labour markets and oppose protectionism'.

Lawmakers are also urged to 'co-operate to halt any potential proliferation of protectionism in maritime labour markets', because 'all national economies benefit from an open labour market'.

This is the kind of fundamental difference in worldview between employers and trade unions where social partnerships reach their limits. 'We strongly disagree with the claims the ICS make about the purported benefits of their ideas, and we are equipping our national affiliate unions with the resources needed to rebut these claims,' says Ms Smith. 'We will also challenge this at the IMO and ILO.'

Mark Dickinson adds: 'As trade unionists, we should be using all the tools at our disposal to the benefit of our members. To support our goal to continuously improve minimum standards, we affiliate to European and international bodies and use social dialogue to that end. It is through our global collaborative work with a range of organisations that we have the ILO Maritime Labour Convention, for example – the international bill of rights designed to ensure decent work for all seafarers. So we value our dialogue with bodies like ECSA and the ICS, but we make it clear when we think they are in the wrong.

'I would encourage members who would like to know more about the ITF and ETF to keep abreast of our regular reports about our work with those federations on the Nautilus website and the dedicated sections in the Telegraph. And if you have an idea which could lead to improvements for members and indeed all the world's seafarers through our international work, please bring this to Nautilus forums and meetings.'

We value our dialogue with bodies like ECSA and the ICS, but we make it clear when we think they are in the wrong Mark Dickinson, general secretary Nautilus International 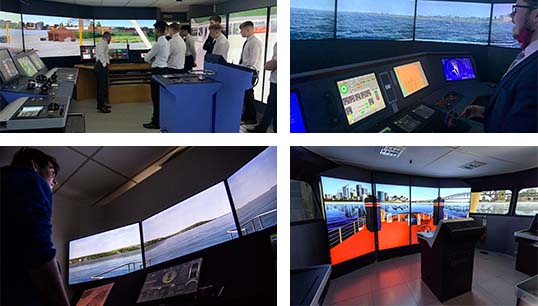 The fair way to go green

Established at COP26 in Glasgow, the Task Force's founding members include the ITF, IMO, ILO, and the ICS. Its purpose is to ensure that workers' rights and developing economies' access to zero-emission vessels and zero-carbon fuels remain at the centre of policy decisions.

The Task Force has announced that it will launch a report at COP27 in November on the skills needed for a just and equitable green transition in maritime. This report will quantify the number of seafarers who need to be trained or reskilled to handle the green fuels of the future, and the findings will feed into the creation of policy and provide clear steps for the shipping industry to take.

'In this Task Force I will stress the importance of social dialogue in the just transition process, and the need for retraining and reskilling,' Mr McGowan says. 'Nautilus is committed to ensuring that skilled and highly experienced maritime workers aren't thrown on the scrapheap or left alone to make the transition to new technologies themselves.'

Nautilus is involved in key industry and union groups where it is important that our members have a voice.

All three branches participate in the European Transport Workers' Federation (ETF) river cruise working group, which provides a platform for unions across Europe to agree what decent working conditions, terms and conditions and pay look like for people in the sector.

Nautilus is also represented on the Cruise Ship Task Force at the International Transport Workers' Federation. Unions representing officers and ratings come together under the ITF banner to discuss cruise industry developments.

The next meeting, which takes place in June, is likely to cover shore leave and ways to ensure seafarers have the same rights as passengers as the industry's post-Covid 'new normal' becomes established. The group will be keen to ensure that terms and conditions achieved for seafarers go back to how they were pre-pandemic, or continue to improve.

What is the Nautilus Federation?

The Nautilus Federation is a group of 22 likeminded trade unions in shipping and inland waterways transport who have come together to improve and expand the services they offer to their members. Nautilus International is a key member of the Federation, with Mark Dickinson as its director and Danny McGowan as coordinator.

Why it is important?

It is important to work together with likeminded unions in order to amplify each other's voices when working on international policies. This serves to strengthen the work of the ETF and ITF to the benefit of all seafarers. In addition, Federation affiliates are always keen to support each other when a fellow affiliate faces problems in their own jurisdiction.

Why it is a good thing for our members?

Improving your rights: proposals for amending the MLC