Increasingly automated onboard operations are turning seafarers into ‘machine minders’ and are serving as a ‘breeding ground for boredom at work’, according to a new study by French maritime medical experts. Andrew Linington reports

Research published in the International Maritime Health (IMH) journal has warned that the impact of monotonous tasks at sea may reduce attention and vigilance, increase the risk of accidents, and lead to higher levels of smoking, drinking, eating disorders and addictive behaviours amongst crew members.

The study, carried out by members of the French Society for Maritime Medicine, says that increasing industrial automation is posing a growing problem and it points to similar research undertaken in the aviation and road transport industries examining the effects of repetitive tasks and little or no intellectual stimulus.

A condition described as 'automation complacency' has been diagnosed amongst airline pilots, in which they can become over-reliant on automated systems and fail to exercise sufficient vigilance or sustained attention. In some cases, they rely on automation rather than exercising their manual pilot skills and abilities.

Some airline pilots complain that modern cockpit systems make it harder for them to revert to manual mode and that their job satisfaction has declined as a result of becoming 'system monitors more than pilots'.

Psychologists commonly define boredom as 'a state of low arousal and dissatisfaction attributed to an inadequately stimulating situation'. Boredom occurs when workers are faced with a monotonous life combined with frustration, the IMH paper notes. 'This combination is often found among seafarers, because of the monotony of work onboard, routine deck-work or using machinery, being on watch, or doing maintenance tasks, especially at sea,' it adds.

'The boredom proneness test does not just appear to quantify a personality trait but is also influenced by the level of job satisfaction... Findings of a study by members of the French Society for Maritime Medicine.

The research compared a group of seafarers serving with a French oceanographic research company with shore staff. It found significantly higher rates of cigarette smoking amongst the seafarers – with more than 15% being smokers, compared with 9.3% of office staff. 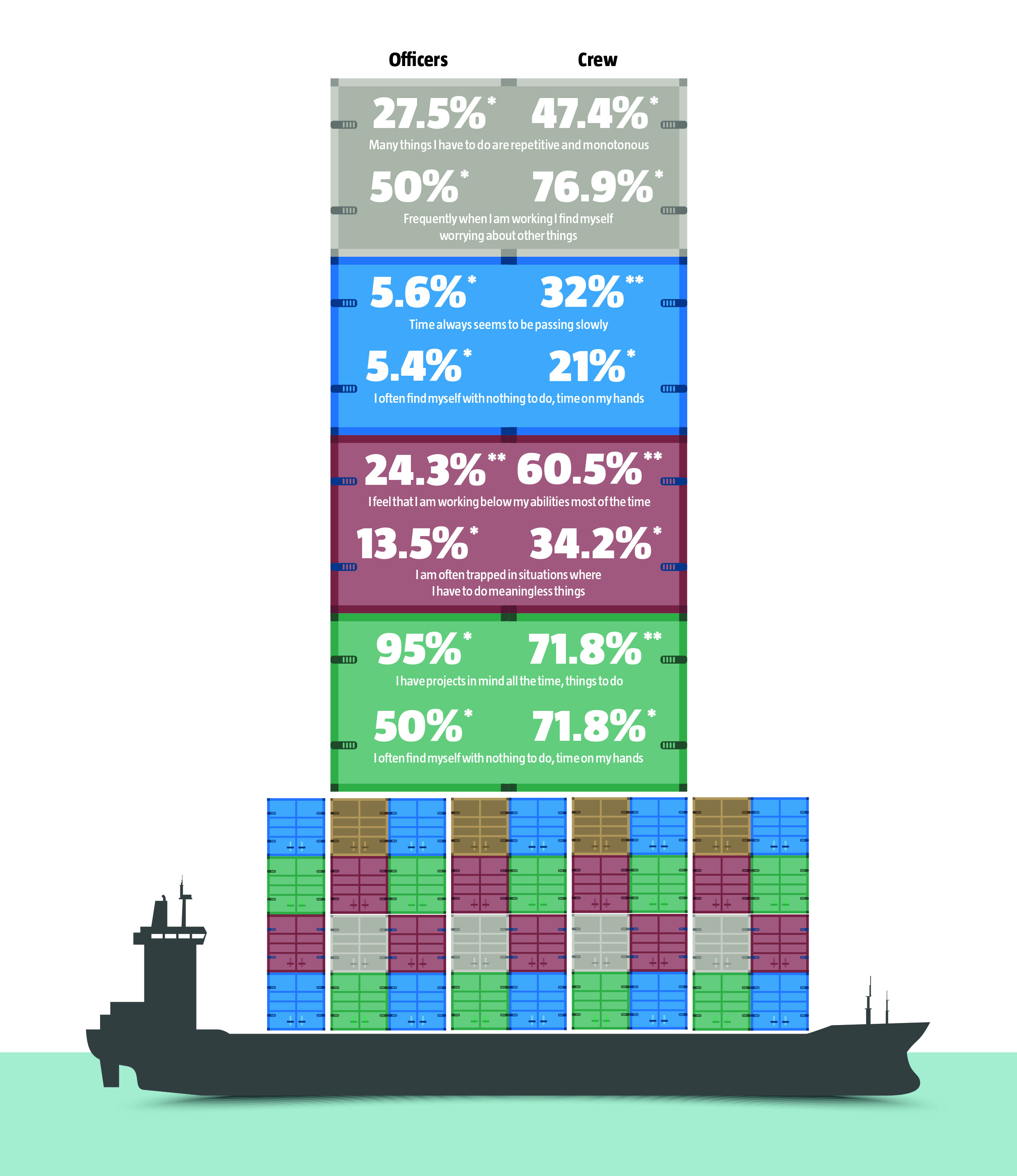 Researchers said differences in the level of job demand and job control meant ratings were much more likely to be classed as passive rather than active in their work, and therefore much more prone to boredom, with high levels of boredom-proneness almost twice that of officers.

'For many of them, this would translate to the existence of a state of boredom due to a lack of external stimulation and, in particular, monotony and the routine nature of the work, a loss of a sense of the meaning of work, or a divergent perception of the passage of time,' the study states.

'The boredom proneness test does not just appear to quantify a personality trait but is also influenced by the level of job satisfaction,' it adds.

The researchers found that while just over one-quarter of officers said that much of their work was repetitive and monotonous, almost 50% of ratings described their duties that way. Fewer than 6% of officers said time always seemed to pass slowly at work, compared with 32% of ratings.

And while one-quarter of officers said they feel they work below their abilities for most of the time, the figure was just over 60% for ratings.

Such figures highlight a problem with the work routine for many seafarers, the report argues, 'which is today transformed on modern ships into watch and maintenance work, of no particular interest to these seafarers'.

Combined with the 'familiar frustrations of separation from family, containment in a confined space, and poor relationships with people onboard', these factors create the classic conditions for boredom, it adds.

The paper points to other research linking proneness to boredom with depression, and the researchers said there was evidence of this amongst seafarers. However, there were differences between officers and ratings – with officers being more affected by levels of external and internal stimulation and ratings more influenced by living and working conditions.

The study suggests that it might be useful to screen seafarers – and especially ratings - for their proneness to boredom and depression as part of their 'fitness to work' process. Although those found with high scores should not be automatically refused work, the researchers suggest they should be subjected to 'enhanced monitoring'.

The research notes that some individuals are better able to cope with boredom-inducing factors than others and studies in aviation have shown that airline pilots have been able to develop techniques to stave off the effects of low stimulation. Most say chatting to their colleague on the flight deck is the most effective way to do this, while one pilot spoke of treating the autopilot 'like a bad co-pilot and watching everything the airplane is doing'.

Other aviation research has found that while cockpit automation can sometimes relieve pilots of certain tedious tasks and give them more time to think ahead, their thoughts may drift onto non-work related matters. Ultimately, it argued, more should be done to improve the design of automated systems so that they 'more meaningfully engage the human operator'.

Plan for automation but don't panic