Many seafarers are considering a career change due to the extra pressure of the crew change crisis. Rob Coston reports

Seafarers have shown remarkable resilience during the Covid-19 pandemic, facing the stress of months trapped aboard and often threats to their livelihood as well. Yet this added pressure has taken its toll, and Nautilus' own research shows that many are now considering a change in career, either moving shoreside or leaving the maritime industry entirely.

In addition, redundancies in sectors such as cruise, which have largely shut down due to restrictions, are forcing others to consider new employment.

With unemployment in the UK now edging towards 5%, what is the outlook for maritime professionals who are looking for a change? Are seafaring skills a good asset that can help a jobseeker to find the right role in these difficult times? And what can applicants do to stand out from the crowd?

'Our job application rate has doubled. In the UK, the average role receives somewhere between 50 and 150 applications at the moment. There's a lot of competition out there and many people are frustrated because they're applying for jobs and not getting anywhere,' Marine Resources managing director James Ward says.

The Southampton-based firm recruits seafarers into shore-based roles, specialising in design and engineering, boat and shipbuilding, and non-technical roles such as sales, marketing and operations.

Yet seafarers should not lose hope – according to Mr Ward, the Covid-19 crisis has actually put them in a stronger position in some ways.

'Leading up to Covid, companies were open about bringing in people from other sectors. Now we're seeing businesses reviewing their recruitment and being much more picky about the type of experience people have.

'Since setting up Marine Resources 18 years ago we've seen things go full circle – at the beginning people were not interested in candidates who had not worked in maritime before, and it seems to be going back to that.'

In addition, growing technology sectors including green fuels, autonomous vessels and smart ports can all benefit from the skills of maritime professionals.

Mr Ward also points out that jobs may return; during previous recessions, companies have laid off staff as a knee-jerk reaction and then looked to fill the gap in labour when they cannot keep up with demand.

This may happen during 2021 in the building side of the leisure sector, for example, where many boats were sold during lockdown and now there are not necessarily enough people to meet demand following redundancies.

Given recent headlines, it might be expected that office-based roles would be hard to find but this is not always the case.

'We're seeing quite a lot of sales roles becoming available. Companies are looking for technical people who can not only sell but speak to customers at a technical level,' comments Mr Ward.

'They feel that there's a market coming in 2021 and want to have staff ready. There are opportunistic company owners who aren't necessarily active in big recruitment campaigns but who would definitely create a role if they had the right CV put in front of them.' 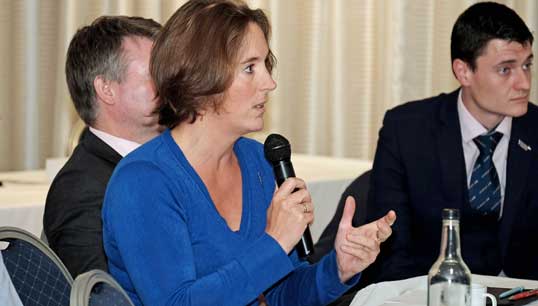 Nautilus International and Maritime London have launched a 'Sea to City' initiative to encourage seafarers who are looking to move ashore to consider City jobs in marine finance and law.

A 'Sea to City' symposium will take place on the first Monday of London International Shipping Week 2021 and will include a networking event for those seafarers interested in finding out more about working in maritime services. A mentoring scheme will also be created as part of the initiative.

Gaining access to opportunities is not necessarily easy, however. Candidates should be aware that the recruitment process has evolved over the past year.

Many businesses are recruiting based on video interviews, without ever meeting the candidate, and living close to work is less of an issue. There is also a more informal approach in some cases, especially where companies may have made redundancies or put staff on furlough – they are reluctant to be seen recruiting for roles that they need to fill, so might seek less obvious ways to find candidates.

On top of that, there is the growing role of computer algorithms in determining who gets an interview.

'Every job is getting 150 application on average – I think it might actually be more – and somebody has to look through all those CVs,' Mr Ward says. 'Usually they're either getting a piece of computer software or someone is skim reading them, so you have to put together a very readable profile. There are a lot of jobs being filled by computer systems and you need to be able to write your CV so it will be picked up by computer software.

'At the moment it's best be really proactive and try to get a face-to-face meeting, even if that is via video conferencing – because you have to stand out.'

'If a seafarer phoned me up today and asked what they should be doing, I would say to they should having a really good think about what are the sort of roles they want rather than just thinking "I want to go shore based". They should then looking at training courses around that, invest in some training and get their CV translated into shore-based language.'

This issue of CV writing is a particular issue, it seems.

'There's loads of blogs, training, free training, and access through things like LinkedIn – there's some really good advice on there. However, there's no hard and fast way to go and apply for a job or write a CV. I would try to speak with a specialist recruiter in the market they're hoping to work in who can advise how to write the kind of CV those companies are looking for.

'They could also speak to a trade association for the industry they are hoping to go into.'

When an interview does come along, preparation for that is also key: preparing for a professional video call is different than talking to friends, and it is important to remember that employers can form a first impression from the light, sounds and background.

Captain Mike Nicholson, an experienced seafarer who has had a varied career ashore and at sea, echoes some of this advice on building broader interests and explaining your skills properly to secure a different position.

'It is not enough at interviews to be "a dedicated self-starter",' he says. 'OK, but what have you done? And if you are coming ashore, the question is "What have you done to prepare yourself for that?". You might have a masters but so have another 50% of the people applying, so study or do something to set yourself apart.

'I remember when I was at sea as a third mate and I leapfrogged ahead of a guy who was second mate and in three years I was chief mate, and he was still second, but I was investing in myself, and my career studying.

'Even if it is not completely relevant to the job, do something above and beyond what is the norm for your position. I don't care if a guy has done a distance learning course in meteorology, it's better than just sunbathing in your spare time.'

Career transitions – staying at sea: Michael Toop found his place on a superyacht

A career site for seafarers