ETF update: P&O Ferries and Europe's race to the bottom

The sacking without consultation of some 800 P&O Ferries seafarers isn't just a UK problem, but has implications for the European Union, writes Estelle Brentnall of the European Transport Workers' Federation (ETF). Plus: European solidary with Ukraine; and social security for seafarers

The P&O Ferries case involved the mass sackings of British seafarers, so it is not surprising that the main focus has been on the UK, but this is really a Europe-wide story. Not only does P&O Ferries sail regularly in European waters, but it also has four vessels under the flag of EU member state Cyprus.

Offering relaxed regulations and the freedom to employ cheap labour from anywhere in the world, Cyprus has for many years been designated a flag of convenience by the International Transport Workers' Federation (ITF) fair practices committee.

We received information that the company would seek to recruit seafarers with much lower employment terms and conditions. This would create downward pressure on terms and conditions and social protection for European crews, thus paving the way to social dumping in European waters. The resulting situation would distort competition and could adversely affect safety and the environment.

Interestingly, not long before the P&O Ferries news broke in March 2022, the French Presidency of the European Union had organised a symposium dealing with these topics. It is significant that the February symposium concluded: 'While not all states agree on establishing a minimum level of social standards for intra-Community maritime routes and services performed in European waters, participants discussed the idea that the labour law applicable to a regular service for transporting passengers between two member states could, for example, be at a level at least equivalent to that applicable in one of the member states involved, where it does not sail under their flags.'

This way, a level playing field among shipping companies and among seafarers would be created. Similar ideas are also being discussed in Britain, with talk of 'minimum wage corridors' between the UK and 'like-minded countries'.

A race to the top, not the bottom, is what we want in Europe. The P&O Ferries case could set a dangerous precedent if unattended by policy-makers not only at UK but EU levels. This isn't just an isolated incident. Whilst the brutal sacking of the seafarers has been shocking, the idea to replace them with cheaper crews to stay competitive was there in the making. The sad truth is that Europe does not have any strategy for socially sustainable shipping.

Europe urgently needs to come up with a European Maritime Space to protect its maritime jobs and maritime skills base, and to offer a solid foundation to build on for all the industry stakeholders. It would really serve the European Commission and the EU member states well to wake up and pay attention to what's going on with P&O Ferries. 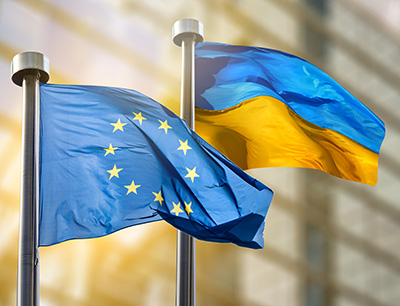 A solidarity fund has been set up to support the activities run by transport unions in Ukraine and in the neighbouring countries to help those affected by the war. Information and resources are provided on a dedicated ETF webpage.

Following the military escalation in Ukraine the ETF called for an immediate ceasefire, for the conflict to return to the diplomatic level, and respect for international human rights and humanitarian law.

In response to Russia's invasion of Ukraine, the EU is imposing restrictive sanctions designed to cripple the Kremlin’s ability to finance the war, impose clear economic and political costs on Russia’s political elite responsible for invasion and diminish its economic base.

ETF affiliate unions support the full implementation of these sanctions under their national legal frameworks.

The right to social security is recognised in numerous human rights instruments at EU and global levels. However, many countries do not ensure that all seafarers ordinarily resident in their territory benefit from the social security protection in the applicable branches.

Seafarers can face problems of availability, adequacy, affordability and accessibility of social security systems. In particular, some European countries do not ensure equal social security treatment between seafarers and shore workers in the case of seafarers serving onboard foreign ships. Some member states, for example, do not have mechanisms in place to force foreign shipowners to pay contributions.

The Covid-19 pandemic with its devastating effects has made this lack of access to comprehensive social security coverage even more acute.

The ETF therefore commissioned Professor Laura Carballo of World Maritime University to undertake a study providing an overview of social security coverage in different EU member states and the UK, and to make some recommendations. The report can be found on the ETF website.

Whilst the EU institutions can enhance coordination activities within the EU, it is clear that national lawmakers also need to review their social protection schemes to be responsive to the needs and rights of seafarers.