Involvement with Nautilus has opened many people’s eyes to issues, people and work that are often hidden from view, even within the maritime community. For retiring trustee John Lang, his years overseeing the Union sparked an ambition: to sail just once as a bargeman on the Rhine

After 20 years as a trustee of Nautilus International, I retired in June 2018. It brought to an end a richly rewarding phase of my life that had generated some wonderful friendships, a remarkable insight into many of the challenges faced by the Union and some immensely enjoyable memories.

It also gave me an interest in something I had never encountered before: the inland waterways of Europe and, in particular, the Rhine.

When it came to leaving Nautilus, I discovered my interest in Europe’s busiest waterway had not gone unnoticed, and the Union had decided to give me the opportunity of seeing for myself what life on the waterway was like. With extraordinary kindness, Nautilus arranged for me to spend a week on an oil-carrying barge belonging to the Dutch owned inland waterway company Verenigde Tankerederij (VT).

And so, on a cold and grey morning in mid-March 2019 I found myself standing on the jetty with Nautilus Council member Captain Jan van der Zee at the Shell Terminal in Europort, Rotterdam, ready to join the 110m-long, 4,237 tonne Motor Tankschip Veeningen. Capt van der Zee, a bargeman born and bred, was to be my mentor and guide during my time onboard, and I could not have chosen anyone more suitable or willing to share his extensive knowledge of a remarkable river.

My first impression on boarding was how incredibly neat, tidy, clean and well-maintained everything was. Safety shoes were worn on deck but never in either the accommodation or the wheelhouse. All four crew members, from the 48-year-old captain to the 24-year-old boatman Harry, spoke impeccable English and were incredibly kind, hospitable and helpful.

On joining, I had no idea what the likely schedule was to be, but was mentally prepared for anything and soon discovered that even the best laid plans were subject to change.

The crew worked eight hours on, eight hours off, one week on duty and one week off with an alternate crew. The captain and his opposite schipper 'drove' the barge from the low level wheelhouse with its uninterrupted all-round views.

Unlike container barges that require a telescopic wheelhouse that could be raised to see above stacked containers, Veeningen carried heavy fuel oil and had no such need. But it did have a requirement to pass beneath some very low bridges and, to achieve this, the top half of the wheelhouse could be lowered, leaving me to speculate how it was possible to see ahead and navigate in such circumstances.

The answer was simple. When lowered, the schipper’s head merged into a recess in the deckhead where he could see both the radar and heads up chart display in front of him and three TV monitors showing the view ahead. I was assured it worked.

The crew did their own catering, and on crew change days would embark with food for the week with a single main meal at lunch planned for each day. Most of the cooking was done by the most junior member of the crew, Harry.

The food was superb, but when I congratulated him on the outstanding Sunday roast chicken, his fleeting glance at the captain sitting next to me made me realise I had identified the wrong chef. The cooking was shared. 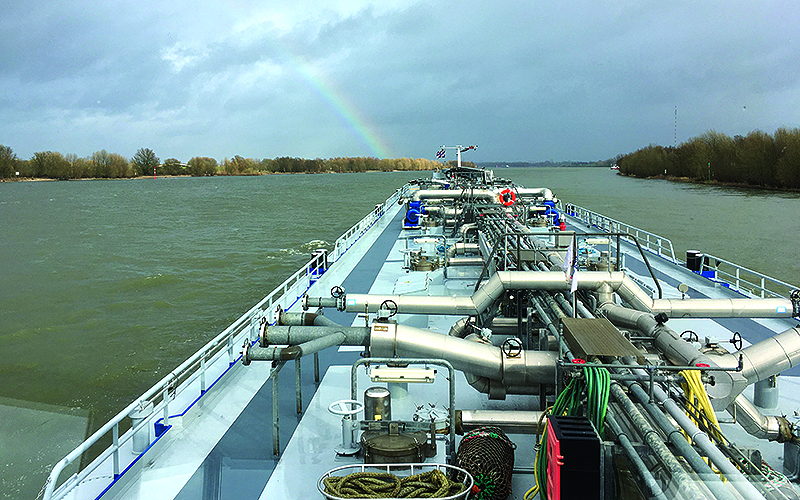 My underway time onboard was largely spent on the Lower Rhine between Rotterdam and Cologne, and my knowledge of places such as Nijmegen, Duisburg and Düsseldorf expanded by the minute.

I also began to learn much of the history and organisation of the river, and to instinctively refer to our position by reference to the number of kilometres we were from the bridge over the river at Constance.

Watching the never ending procession of barges was a constant source of interest, and it wasn’t long before I had a good grasp of the type of barge being used and their respective cargoes: containers; coal and iron ore; vehicles; scrap metal; aggregates; fertilisers; chemicals; and a few passenger-carrying cruise barges.

It was not unusual to have up to 12 other vessels in sight at any one time, and only once were we without any company at all.

Steering using a small joystick demanded intense concentration at all times. We were rarely on a straight course for more than a few minutes, and those aspiring to gain a RijnPatent or Rhine licence were expected to know every yard of the river, every obstacle and where the deepwater channel lay.
Safe navigation involved an instinctive feel for what another barge was going to do next.

Numerous riverside signs gave mandatory, warning or recommended instructions, and each barge had a large blue board mounted on the starboard side of the wheelhouse which, when raised from the horizontal to the vertical, indicated the intention to pass starboard to starboard. A flashing white light was situated in the centre of the board for use at night.

One essential element of Rhine navigation that featured more than most was knowing, and predicting, the constantly changing depth of water. Spring, with the melting snows of the Alps, tended to result in higher levels.

My visit happened to coincide with some very heavy rain and I witnessed the Rhine rise over 1 metre in 24 hours. This was in complete contrast to October 2018 when, after a prolonged drought, the water was less than a metre high – bringing barge traffic to a near standstill with severe economic impact for much of Northern Europe.

My week passed all too quickly, and this short description hasn’t even started to touch on the history, legend and lore of a remarkable river, or the people who work on it. VT and Jan van der Zee made a dream come true and I am enormously grateful to both him and his colleagues onboard Veeningen for making me so welcome.