Wonderful story of the inland waterways

Until the coming of the railways, moving goods by water was significantly 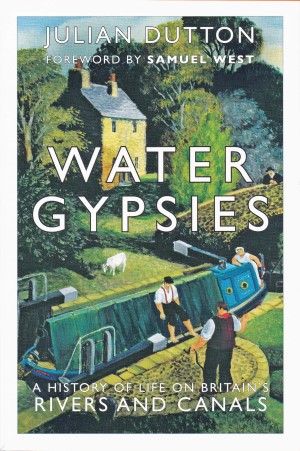 cheaper and easier than by land. Now that Britain's waterways are more a holiday destination than a logistics network, it is easy to forget just how important they were to the prosperity of the country.

With so many people employed on Britain's rivers and canals over the centuries, it is unsurprising that many of them ended up making their homes afloat as well. This historic community and culture – 'the key components in the circulatory system that kept the body politic alive' – is the focus of a new book by the award-winning writer and actor Julian Dutton, who himself grew up on the water aboard a Chelsea houseboat.

From the first liveaboards – prehistoric lake-dwellers at Glastonbury, ancient and medieval traders who plied the Thames, Severn and Trent – Dutton takes us all the way through the story of life on our rivers and canals. He even gives us a waterman's eye view of a Roman voyage down the Thames.

There's plenty on the first 'modern' water-dwellers in the 19th century; this is a social history as well as a practical one, which comes through in later chapters as Dutton explains how exactly people lived – meeting up, for example, at subculture hubs like Braunston to exchange news, marry and forge social connections even as land-dwellers lost their lifestyles in the move to the cities. Religion, river literature, Roma ethnicity and 'gypsy-like' lifestyles  all feature.

Dutton takes us through the decline of river trade, after which we get a view of the non-commercial houseboats that became popular among bohemian types in the 20th century. Dutton even brings us bang up to date with a visit to the London houseboat community where he grew up – now inhabited by barristers and graphic artists, with a boat costing a cool half a million pounds. At St Katherine's dock, we are told, lies a converted sailing barge with a sauna, jacuzzi and jet ski launch. Have-nots still inhabit the river, but the haves are present in increasing numbers.

Many unexpected bits of this history await the reader, like the 'river patrols' of the Second World War or the fact that Magna Carta includes a stipulation to remove fish weirs from all rivers, a sign that river-traders had become more important than locals. Also included are technical details of the waterways and locks, and of the vessels themselves, from dugout canoes through to clinker-built bronze age longboats.

Dutton, and foreword writer Samuel West, give praise to the slower pace of the riverine life and the dreamlike reveries it has inspired in artists who take to the water – portraying the desire for a new life aboard as a yearning for a lost Eden.

However, he doesn't shy away from the harsh realities of existence for most boat-dwellers throughout history. These ranged from cramped, unsanitary conditions to the travails of regular migration in search of work – while others suffered far worse, notably those unfortunates condemned to live aboard prison hulks.

Throughout the book, Dutton's love for – and personal connection with – the subject shines through. This is a thorough, balanced and enjoyable account for any seafarer interested in discovering more about a different life aboard – and essential reading for those who dream about joining the 30,000 people still making their homes on Britain's waterways. As Dutton writes: 'Though the shape, look, feel and cost of a houseboat may have changed, the impulse to take to the water … to lead a life on the fringes and hinterlands of human society, is the same as it has always been.'

Engaging reworking of a well-known story

In Titanic 'Iceberg Ahead', James W Bancroft weaves together a historical account of the Titanic tragedy, from conception to its destruction, with the personal accounts of survivors of the tragic sinking of April 1912.

A must-read for maritime businesses

Making Waves neatly sets out the rationale for why PR should be taken seriously by maritime businesses.

Thrilling myths, legends and true tales from our maritime past

'Strange things indeed are seen in the sea world', wrote Anglo-Saxon poet Cynewulf, and these two works by Graham Faiella examine these many maritime enigmas.

Out and proud in an unusual maritime memoir

After being interviewed in the Nautilus Telegraph earlier this year, transgender maritime professional Michelle Clarke has now published her illustrated memoir about her life at sea and ashore.