Merry memories of a tankship titan

Lone Star of the Red Ensign By Terry Nunn

Lone Star of the Red Ensign is an anthology of stories recounted by crew members working aboard vessels owned and operated by Texaco Overseas Tankship Limited (TOT). However, their lived experiences will no doubt resonate with seafarers across all types of ships in all parts of the world. 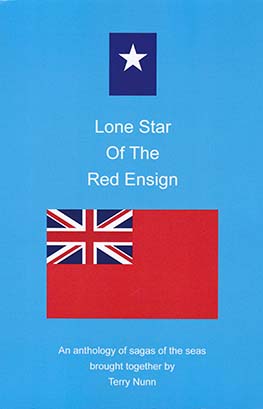 Compiled by Terry Nunn – a former TOT manager of fleet personnel who worked ashore and at sea for over 25 years with the company – the stories draw heavily from contributors John Campbell, Dave Patrick, and Brian Goodland, who also provide details of the company and historical maritime context. The many other voices that add colour and flavour to this anthology can be seen in the welcome 'contributors' pages at the back.

Nunn runs the Texaco Overseas Tankship Association, a social group formed in 1997 and open to anyone who was employed by the company or its predecessors, so is well-placed to share these stories before they are forgotten.

The accounts are deeply personal, and range from anecdotes of wartime hijinks to taking up first command of a tanker, to crossing the line. The 179-page A4 title has a generous font size and plenty of colour and black and white photos to add interest. Images of young seafarers enjoying their time at sea, creating memories that clearly have shaped their ongoing lives and careers, prove how formative that time was.

TOT was the UK-based tanker operating company of US oil major Texaco, which at one time had 30 vessels in its British fleet.

Its crew were mainly British officers and Indian ratings. Married officers were able to bring partners aboard, and there is a whole chapter dedicated to them, including many photos of spouses enjoying their time at sea. Carole Goldsmith – whose own memoir A Wife on the Ocean Wave was reviewed in the Nautilus Telegraph in 2020 – describes her honeymoon trip on a TOT tanker, including meeting what felt like the largest cockroach in the world in Conakry.

In the late 1980s, the worldwide downturn in the demand for oil led to a reduction in the number of vessels operated by Texaco, including the fleet of TOT. In 1994 Texaco disinvested from owning its fleets of tankers. This resulted in the sale of all remaining tankers owned by the organisation in 1995.

Some ships became managed by third parties, with many TOT personnel retained by the managers to continue operating them, but this book is very much about looking back at TOT itself – and concludes with a handy alphabetical list of vessels owned by the company, including years of service, deadweight, power and class. An enjoyable read for anyone who wants to remember the good points about working at sea.

Historians are sometimes accused of obscuring what events were actually like by using dry prose; not so this book, which begins with visceral descriptions of bodies washing up on beaches

As well as being the first biography of 19th century English shipbuilder and shipowner Duncan Dunbar, this is also a first book by New Zealand-born author Michael Rhodes

Sietas and its Ships (Part 2), by Bernard McCall

In this follow-on volume from 2020's Part 1, Bernard McCall returns to the JJ Sietas shipyard of Hamburg, which was founded in 1635 and remained in family ownership until 2009. It still operates today as part of the Russian-owned Pella group.

Like its predecessor – reviewed in the Telegraph in May 2020 – Leith-Built Ships Volume 2 tells the story of Edinburgh's once-proud shipyards and the vessels constructed there.