The Junks and Sampans of the Yangtze by G. R. G. Worcester 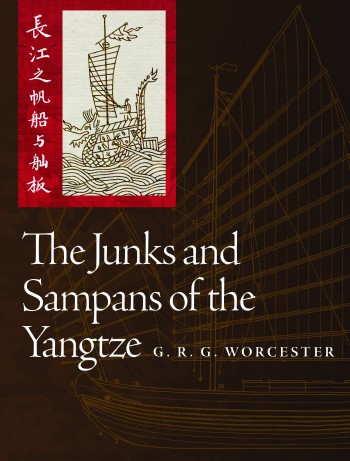 China, with its enormous population and vast distances, has been dependent on transport by water for thousands of years.

During that time, the Chinese civilization created an unbelievable range of specialised vessels, now swept away in the tide of modernisation that has transformed the country into a 21st century powerhouse.

This edition of The Junks and Sampans of the Yangtze – a reissuing of a classic set of texts published in the 1940s – offers the reader a chance to look back at that forgotten maritime world, which took so long to create and such a short time to destroy.

The author, G. R. G. Worcester, was born in 1890 and died in 1969. He served as river inspector for Chinese Maritime Customs for 30 years. During that time, he helped to open the Yangtze river – one of the country’s two key waterways – to steam navigation, but he also developed an affection for the classic Chinese vessels that had already begun to give way to more modern craft. As well as writing this definitive text about them, he also helped to build the unique collection of junk models now found in the UK’s national Science Museum in London.

Though the text is certainly definitive, it is also a difficult read – partly because it was written in the early 20th century, so it tends to be long winded, but mainly because the level of detail is overwhelming. Worcester begins by taking us back 3,000 years to the very beginning of China’s (long) written history, with scratched writing on animal bones that refers to oars and caulking, and goes right through to his own time. You will find reams of detail about everything Chinese that is vaguely related to waterways, including tax collection, clothing, navigation, knots, religion, insurance, tea houses and life among the families born and raised aboard the junks. The complexity of Chinese maritime life and the author’s attention to detail are both stunning.

However, overwhelming detail is also where the book really shines, especially technical detail. Worcester exhaustively covers the construction of all kinds of junks, from design to tools and materials. These pages will be especially interesting to those who would like to follow in Worcester’s footsteps by building models, as will the many contemporary photographs, illustrations and diagrams.

Needless to say, this is not a book for the casual reader. However, there is a reason why it is considered a classic, and there is plenty of opportunity to dip in for interesting titbits both cultural and technical – for example, that it was considered bad luck to speak while sailing under particular bridges, or that the Chinese were the first to use watertight bulkheads for strength and safety. Certainly, it is a publication for those with a deep interest in the subject, or a love for interesting and obscure nautical facts.

All you need for an inland waterways adventure

For those who fancy the inland waterways for a summer holiday this year, The Canal Guide from nautical imprint Adlard Coles is an attractive guidebook and resource showing off the richness of the UK's heritage.

The Devil and the Dark Water by Stuart Turton

Vessel views from a seasoned shipspotter

Ferry Good is also a personal collection of vessel photographs combined with supplementary technical and historical information. Ever ready with his camera, Watson has included more than 200 images of ferries taken in his travels

The Merchant Navy in vibrant verse

A Bucket of Steam by Captain Joe Earl

A Bucket of Steam is both a memoir and a work of the imagination – a little gem of a book where the author reflects on his own seafaring life and tells other maritime stories, all through the medium of poetry.