The Shetland 'Bus', by Stephen Wynn 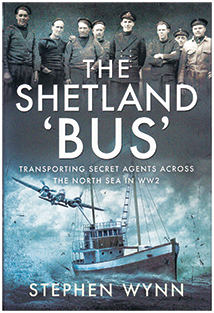 When we remember the wartime contribution of the Merchant Navy and fishing fleets each November, the chances are that we are thinking of the Atlantic Convoys or the Dunkirk Evacuations. But there are less well-known stories of civilian vessels in the Second World War, and it is one such tale that Stephen Wynn relates in The Shetland 'Bus'.

The Shetland Bus was the name for an operation which used fishing vessels to smuggle secret agents into Norway as part of the resistance to the country's occupation by Nazi Germany.

After the Germans invaded Norway, many Norwegians sought to escape, and refugees – including Norwegian military personnel – were taken by brave fishing crews to Lerwick in Shetland, the nearest safe haven across the North Sea.

As Wynn explains, a series of events then unfolded which led to the British Special Operations Executive training the escaped Norwegian soldiers as secret agents and sending them back on the same Norwegian fishing vessels to plant bombs and carry out other guerrilla warfare tactics.

By strengthening the Norwegian resistance in this way, it appears that the operation may have led to Germany diverting additional troops to the country, drawing them away from more significant theatres of war. Meanwhile, Britain kept a close eye on the possibility of being invaded itself from the north, maintaining a significant military presence in Shetland.

The Shetland 'Bus' gives a very thorough account of events, setting the scene with an outline of the invasion of Norway, and pointing out that the country's fishing fleet had proliferated under occupation because of the need to increase local food production – which later helped those vessels carrying secret agents to blend in.

The book pays tribute to a range of named Norwegian agents, as well as listing the fishing vessels and crews operating the Shetland Bus, many of whom died in service. The story will probably be appreciated most by those who already have an interest in military history, but although the material can be quite dense at times, it is well presented in manageable chunks, and there is a welcome selection of images on glossy pages in the centre.

Lochs of Scotland By Stuart Fisher

Seafarers who fancy spending their shore leave on the water will be well catered for in this new guide to Scottish lochs, especially if planning a spring or summer break.

From the archives of the Paddle Steamer Preservation Society, Mike Tedstone has compiled a selection of handsome black-and-white images depicting P&A Campbell Ltd vessels in action around the Bristol Channel.

A maritime stroll through time

It's not often at the Telegraph that we see two books arrive from two different publishers that are by the same author, but Malcolm Batten has broken the mould.

Picturing a port city's recent past

Shipping on the Thames and the Port of London During the 1940s-1980s, by Malcolm Batten and Reg Batten

In the second of our three books this issue celebrating London as a port city, author Malcolm Batten brings readers a treasure trove of ship pictures taken by his father Reg Batten.