Home News & insight Ships of the past Malakand 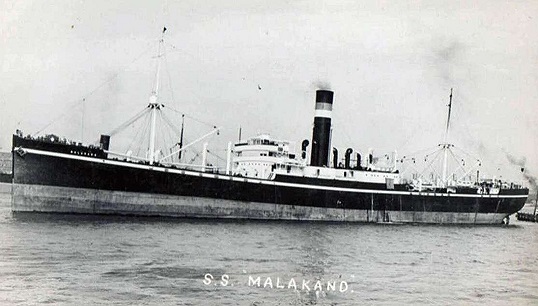 The Malakand was the second of three Brocklebank ships to bear the name, replacing a 1905-built predecessor which was torpedoed and sunk by a German U-boat in the Atlantic in November 1917.

The second Malakand was built at Lithgow's yard in Port Glasgow and was a sistership to three other Scottish-built vessels: Maihar, Mahsud and Mathean, which all entered service between 1917 and 1919.

The ship weighed 7,649grt with a loa of 489ft (149m) and was powered by a triple-expansion Dunsmuir & Jackson steam engine rated at 778nhp. The single-screw Malakand had a top speed of 12 knots and went on to run some services between the United States and Wales, Avonmouth and London, as well as between New Zealand and Avonmouth.

The Malakand and Matheran were two of four Brocklebank ships which were specifically fitted out for training cadets. Each was able to carry up to 30 trainees and a lecturer.

How big was the Malakand?

When was the Malakand launched?

The Malakand was launched in November 1918.

What were the names of the Malakand's sisterships?

The Malakand had three sisterships -Maihar, Mahsud and Mathean- which all entered service between 1917 and 1919,

How much damage followed the bombing of the Malakand?

The dock was destroyed, along with four other ships and a barge. Four people were killed and Captain Kinley was injured.

The cadet training scheme was abandoned on economic grounds during the 1920s shipping slump.

As the Brocklebank line had taken a leading role in trade between India and the UK since the early  19th century, the Malakand was next used to operate a regular service linking Calcutta with London and Dundee.

Carrying mainly jute cargoes, the vessel had a fairly uneventful career at first, but in 1924 it ran aground while departing Calcutta in August 1924, and was then floated and returned to port having lost anchors and chains.

In December 1928, the Malakand suffered a damaged rudder in the English Channel and need to be towed to Tilbury by two tugs. The cargo of jute bales had to be unloaded and shipped to Dundee by other vessels while repairs were carried out in a drydock.

During the Second World War, the Brocklebank fleet of 26 ships were actively involved in operations. The first of 16 ships the company lost during the war was sunk only a few days after the conflict began.

Liverpool was a prime target for the Luftwaffe because of its core role in the Atlantic convoy system.

On 3 May 1941, at the height of the airborne attacks on the city, the Malakand was in Huskisson Dock loading a cargo of munitions for shipment to the Middle East.

Some accounts suggest the Malakand was originally struck by a barrage balloon, which had broken loose during the bombing and crew members managed to extinguish the fire. However, a more serious blaze began when a dockside building suffered a direct hit and flames spread to the ship.

Malakand's master Captain Howard Kinley and his crew fought the fire for more and were considering scuttling the vessel before the order was given to abandon ship.

On the morning of 4 May, the Malakand exploded, destroying the dock, four other ships and a barge. Four people were killed and Capt Kinley was injured.

The blast was so violent that parts of the ship were reported to have been found more than two miles away.

An eye-witness account: Nautilus member Alex Harrison was not put off a career at sea after watching the Malakand go up in flames as a young boy. Read more...

The Oxfordshire had a 34-year long career as an emigrant ship, passenger liner and cruiseship.